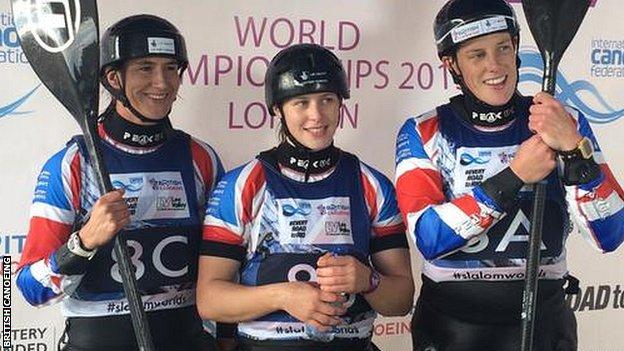 But in the team event, which sees each boat follow the other down the course, the trio were were only pipped to gold by the Czech Republic.

The men also missed out on individual glory but won bronze collectively.

Florence and Hounslow qualified fastest for the final but picked up penalties at two gates on their final run, missing out on a podium place.

"I'm pretty disappointed," said Florence. "We paddled well in terms of the pace which was good, but two slight touches cost us that gold medal. We didn't get quite far enough across at the last gate and I couldn't stay off it which cost us silver."

Together with Adam Burgess and Greg Pitt, the British crews thought they had won silver with a run of 123.59 seconds in the team event, but were later demoted to bronze after a successful appeal by one of the other boats against a penalty and France took gold with Germany collecting silver.

Woods, 20, thought she had won an individual gold after setting the fastest time and a new personal best on her home course.

But she was later given a 50-second penalty on gate 18. "I thought I was in the middle of every single gate and I am speechless to know this is the outcome," said Woods. "But I guess the judges have called what is fair."