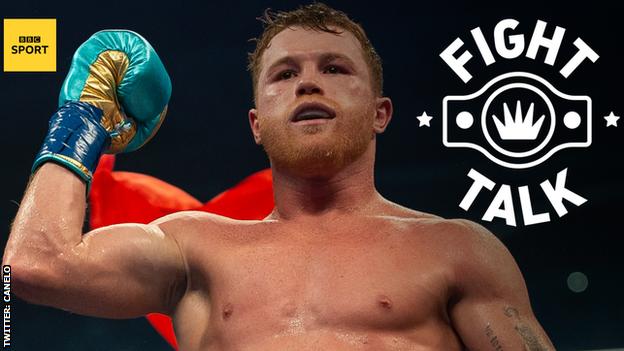 In this week's Fight Talk we recap on Saul 'Canelo' Alvarez's sensational win over Briton Billy Joe Saunders in Texas and look at potential opponents for the Mexican superstar.

We also hear how the boxing fraternity reacted after Saunders - who suffered potential career-ending injuries - was pulled out by his corner before the ninth round, with rival Chris Eubank Jr taking aim at his former foe.

'The greatest of a generation'

One punch. That's all it takes.

On Saturday night in Texas, Alvarez produced another clinical finish to shatter the dreams of Saunders.

The Mexican superstar unleashed a ferocious right uppercut, a shot which left Saunders unable to continue after the eighth round and needing surgery for "multiple fractures" to his eye socket.

We really are running out of superlatives to describe Alvarez.

Having turned professional at just 15, he was quite literally educated through the school of hard knocks.

Over the next 15 years he learned - and fine-tuned - his skills to become arguably the best pound-for-pound boxer today.

Alvarez captured Saunders' WBO super-middleweight belt - to add to his WBA, WBC and Ring Magazine titles - while notching up his 56th career win.

His performance earned the praise of fellow boxers...

So what next for Alvarez?

The most likely opponent is an American who holds the one belt missing from his collection, IBF super-middleweight champion Caleb Plant.

After his win, Alvarez said: "That's the plan, I'm coming my friend."

Plant, 28, has won all 21 professional bouts but is relatively unknown outside of those who follow the sport.

In many fight fans' eyes, he's lost before the fight has even been made…

A clash with Alvarez is undoubtedly the golden ticket for any fighter, and undefeated WBC middleweight champion Jermall Charlo has said he is willing to move up a division and dare to be great.

"I'll lose my [WBC middleweight] title and go to 168 to make the fight happen now. Boxing needs this fight to happen," the 30-year-old posted on social media.

While Charlo went on social media to call Alvarez out, his fellow American Demetrius Andrade went a step further.

"I'm a big fan… but what's up though? When can we make it happen? What you think?"

Alvarez was in no mood for entertaining the confrontation.

Alvarez v Andrade is a clash which is unlikely to happen any time soon, but this American champion would like to see it…

Another option could be a third fight with Kazakhstan's Gennady Golovkin, a man who Alvarez controversially drew with in 2017 before beating by majority decision a year later.

Many fans had Golovkin winning both of those bouts, so does Alvarez still have at point to prove? Or, at 39, are Golovkin's best days now behind him?

In November 2019 Alvarez moved up to light-heavyweight and knocked out Russian Sergey Kovalev to win the WBO title. Kovalev's countryman, WBC and IBF light-heavyweight champion Artur Beterbiev, has 16 wins with 16 knockouts and could provide a stern test for Alvarez.

In beating Saunders, he inflicted defeat on a seventh British opponent.

Could it be eighth time lucky for the Brits? Chris Eubank Jr hopes so…

Sticking with Eubank Jr, he had very little sympathy for former foe Saunders.

Saunders won by split decision when the two fought back in 2014, but their rivalry did not end there.

Over the years the two have gone at it like hammer and tongs and, before Saturday night, Eubank Jr bet £10,000 on an Alvarez knockout.

Having won his bet, the Brighton man posted several videos of himself rolling around the floor and laughing at Saunders' expense.

Eubank Jr also referenced a video in which Saunders seemed to criticise heavyweight Daniel Dubois for taking a knee and pulling out of a fight against Joe Joyce last year.

Dubois fractured an orbital bone during the bout and, speaking at the time, Saunders said he would have carried on.

Is Saunders' career hanging in the balance?

Putting the stoppage to one side, Saunders had his moments and caused problems for Alvarez at times.

He's a two-weight world champion who has shown he can mix it at the elite level and, despite the loss, he still has the backing of good friend - and WBC heavyweight champion - Tyson Fury…

A rematch with Eubank Jr would certainly whet the appetite of fight fans but, after suffering such extensive injuries to his eye, there is no guarantee on when - or even if - we'll see Saunders in the ring again.