In this week's Fight Talk we rate Briton Billy Joe Saunders' chances against Mexican Saul 'Canelo' Alvarez before their blockbuster unification clash in May and former Love Island star Tommy Fury wins with a second-round knockout, but fans criticise the level of opponent.

Plus there's reaction to a new Frank Bruno v Mike Tyson documentary and promoter Eddie Hearn is mocked, again, for his choice of outfit after wearing pyjamas to a weigh-in.

England's Saunders - as always - is full of confidence after it was announced the WBO super-middleweight champion will take on pound-for-pound king Alvarez in a unification clash on 8 May.

Canelo is not only the biggest draw in world boxing but one of the most feared and ferocious fighters around.

But is Saunders, a tricky southpaw who seems to raise his game in the big fights, the man to end the Mexican's reign?

"You have to dare to be great and you aren't going to be a great if you don't beat the greats," Saunders told Matchroom Boxing.

"I believe I am the only one with the footwork, knowhow, skillset, mindset and brain to unlock that door in Canelo."

On Saturday, Canelo looked as dangerous as ever as he defended his WBC and WBA belts after dismantling Avni Yildirim, his mandatory challenger.

The gulf in class between Canelo and Yildirim was clear to see as the champion unleashed accurate and powerful blows to the head and body, with the Turkish fighter pulled out by his corner before the fourth round.

Canelo's professional record stands at 55 wins, two draws and one defeat to Floyd Mayweather in 2013.

And he seems to enjoy beating up the Brits, with victories over Matthew Hatton, Ryan Rhodes, Amir Khan, Rocky Fielding and brothers Liam and Callum Smith.

Saunders - who has won all 30 of his fights - has the ability to cause Canelo problems but has also only fought four times in the past three years.

That inactivity, coupled with the sheer brilliance of his opponent, leads most fight fans to predict a Canelo win… 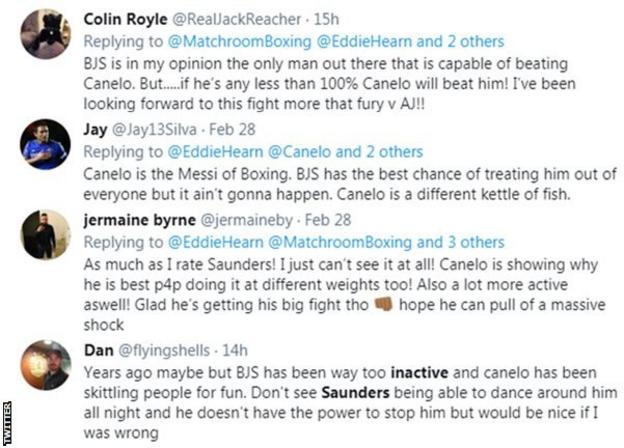 Will 'lightning strike twice' for the Fury family?

He's got the name, the looks and the fanbase - but can prospect Tommy Fury go on to emulate his brother Tyson, the WBC heavyweight champion, and achieve big things in the sport?

The 21-year-old, who shot to fame during his appearance on reality TV series Love Island in 2019, notched up his fifth straight win as a professional with a second-round knockout over Scott Williams at the Copper Box Arena on Saturday night.

"Imagine the pressure on me from Love Island and being Tyson's brother but I don't even feel it, I thrive off the pressure," the light-heavyweight told Queensbury Promotions after the fight.

His dad and trainer, John Fury, is also predicting a bright future, adding: "I've already got one king of the ring and lightning is definitely going to strike twice."

It's fair to describe Tommy as a boxing novice, having had only 10 amateur bouts before turning professional. But fans still want him to see him in slightly more competitive fights…

Bruno and Tyson reunite for documentary

Fight fans have been gripped by a new Sky documentary this week which relives the two heavyweight tussles between British heavyweight Frank Bruno and America's Mike Tyson.

Their fights from 1989 and 1996, both of which Tyson won by stoppage, transcended the world of boxing and captured the public's imagination as two strikingly different characters went head-to-head.

Londoner Bruno charmed the nation with his infectious laugh and happy-go-lucky demeanour, and would regularly appear in pantomimes and on Saturday night TV shows.

The aggressive Tyson - who was referred to as the 'baddest man on the planet' - was one of the most controversial boxers of all time and rarely strayed away from 'fight mode'.

In the documentary, Bruno visits Tyson's home in America as they discuss their battles in the ring, separate journeys to world-title glory and struggles with mental health and fame.

'Bruno vs Tyson' has been well received on social media...

Eddie Hearn said promoting the Canelo-Yildirim card at the weekend was one of his career highlights, and there's no denying the Briton knows how to build and sell a fight.

But, not for the first time, he caused a stir on social media this past week with some questionable outfit choices.

Hearn rocked up to the weigh-in wearing some designer pyjamas gifted to him by Canelo, much to the amusement of Matchroom chief executive Frank Smith…

Hearn has form, mind you. In December this polo shirt prompted a reaction from former England cricketer Andrew Flintoff… 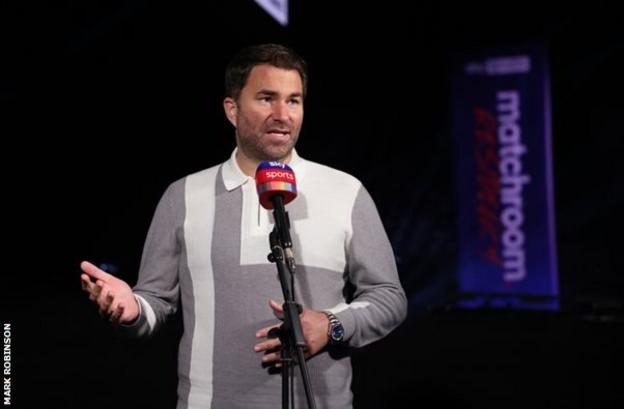 Outrageous clobber or a trendsetter? We'll leave that for you to decide.