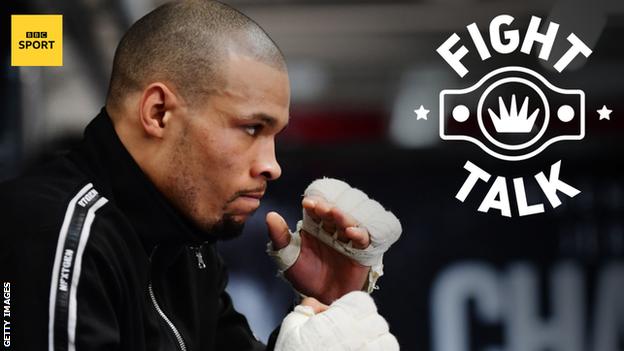 In this week's Fight Talk we explore whether Chris Eubank Jr can reignite his career after signing with a new promoter and Anthony Joshua says he has five more years left in the sport.

We also discuss lightweight Ryan Garcia calling out American Gervonta Davis rather than pursuing a world title challenge and, in the strange world of YouTubers turning to boxing, Logan Paul hints he could fight his own brother, Jake.

Is now the time for Chris Eubank Jr to finally fulfil his potential?

The son of a British boxing legend and a skilful and charismatic fighter in his own right, the 31-year-old middleweight signed with a new promotional company this week, linking up with Team Sauerland.

But, so far, his career hasn't really gone the way many expected.

Having turned professional in 2011, Eubank's blistering hand speed and uncanny resemblance to his dad, Chris Eubank Sr, sparked the interest of fight fans.

And as videos of brutal sparring sessions with then world champion Carl Froch circulated, Eubank was considered one of the hottest prospects in British boxing.

He has lost just twice - a close decision to rival Billy Joe Saunders in 2014 and to another fellow Briton George Groves in the World Boxing Super Series competition four years later - but has fought only three times since that last loss.

The Brighton-born fighter beat former world champion and Olympic gold medallist James DeGale in February 2019 and recorded a technical knockout victory over Matt Korobov in December 2019 after the Russian injured his shoulder in the second round.

With inactivity and regular changes in promotional companies, boxing fans seem to have lost their patience with Eubank...

He is now based in the United States and trained by four-weight world champion, and boxing royalty, Roy Jones Jr.

"I look forward to the big fights that I crave. I've spent the last 12 months in the gym and I feel better than ever," Eubank said.

"I'm ready to take over the middleweight division.

"I want all the champions - Ryota Murata, Jermall Charlo, Demetrius Andrade, Gennady Golovkin - put me in the ring with any of them."

Whether those fights materialise or not remains to be seen.

Joshua has 'five more years' in the sport

Unified heavyweight champion Anthony Joshua has been talking about retirement this week.

But before you get too disheartened that a blockbuster bout with fellow Briton Tyson Fury won't happen, Joshua says he still has five years left in the sport.

"This isn't the start of my career. I'm coming towards the end of my career," he told Sky Sports News.

Meanwhile Joshua's promoter, Eddie Hearn, says he is "90% " confident an Joshua-Fury clash for the undisputed heavyweight crown will happen this year.

"I don't see anything getting in the way," Hearn told Boxing Social.

With talks between the two teams seemingly progressing well, Fury couldn't help but have a little dig at Joshua on Twitter this week...

Although we also saw a serious side to the 'Gypsy King,' as he shared these words of wisdom on the sacrifices a professional boxer has to make...

Garcia, however, doesn't seem too fussed about taking on Haney.

"Belts don't mean anything nowadays. I could take somebody off the street and, if I play it politically correct, I'll make them a champion," he told SiriusXM Boxing.

But if you think Garcia is looking for an easy fight next, think again.

During an appearance on a podcast with heavyweight great Mike Tyson, Garcia video-called Gervonta 'Tank' Davis and the pair exchanged a few words, before agreeing to fight each other next.

And finally, the fight game often runs in the family and there are a host of boxing brothers who have conquered the sport.

The YouTubers have ventured into the world of boxing in recent times, but they wouldn't actually fight each other, right?

After Jake, 23, labelled Logan, 25, a "fake fighter," the elder sibling replied with a challenge.

"OK, let's box, because Jake is the kid that gets beat up by my sparring partners," Logan replied on his YouTube channel.

We can't keep up.