Callum Smith is adamant he can pull off what the 5 Live Boxing team say would be "one of the greatest wins by any British fighter" when he faces Saul 'Canelo' Alvarez on Saturday.

Smith finds himself in the unusual position of being a world champion and an underdog as he prepares to face boxing's best-paid star in Texas.

Alvarez, the thrill-seeking Mexican hero who has moved successfully up and down boxing's weight divisions, has lost only once in 56 fights, and that was seven years ago.

The 5 Live team - who will commentate on the fight - anticipate "something special" in the ring at about 04:00 GMT on Sunday but who do they think will win? 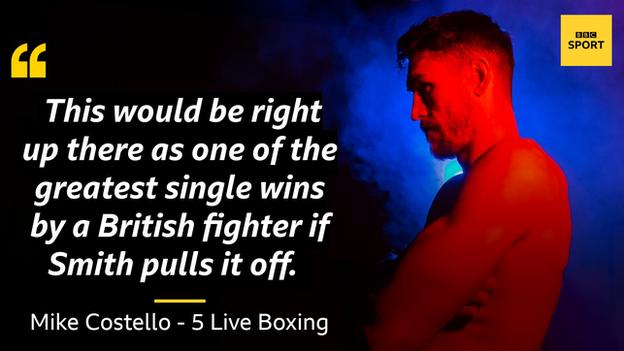 "The world knows how good 'Canelo' Alvarez is but after Saturday night they'll know how good I am," Smith told 5 Live Boxing this week.

The Liverpudlian puts his WBA world super-middleweight title on the line in San Antonio and with the vacant WBC belt up for grabs too, the winner will hold two of the four belts at 168lbs.

Alvarez, 30, beat highly respected world champions at light-heavyweight and middleweight in his past two fights. Here he takes on an unbeaten opponent so it is hard to argue he is not living up to his promise of taking "risks" to chase "history".

Admirable too is his willingness to take on a man seven inches taller, with a sizable reach advantage. When photographs of Smith towering over his rival were circulated on Monday, talk on social media began to give the underdog a chance.

"There's only so much size your ability can make up for," Smith told 5 Live.

But BBC Sport boxing correspondent Mike Costello warned: "Smith's last opponent John Ryder is only around an inch taller than Canelo and he gave Smith all sorts of problems. So if Ryder can pose him problems, Canelo, with his boxing IQ, can too."

A long career and a short camp

Alvarez beat Smith's brother Liam in 2016 - one of five wins over Britons on his record. He dismantled the older Smith brother with brutal body punching.

But Alvarez brings all sorts of variety and has shown an unshakable chin to match. He has held versions of a world title at four weights and only the great Floyd Mayweather has beaten him since he started his professional career when he was barely 15.

Costello warns Smith can expect the kind of body attack "he has never been subjected to", but adds: "Canelo has had 13 12-round fights, and a number have gone 10 or 11 rounds as well. At the age of 30, after 15 years as a pro, how much more is left?"

Being the sport's biggest draw means you can dictate that bit more. Alvarez recently walked away from a £278m fight contract to effectively have more control of his career. He picked Smith from a number of fighters looking for a big pay day and, some say crucially, he only gave him just over four weeks' notice.

"I just can't get my head away from this shorter training camp," said 5 Live Boxing's Steve Bunce. "Will it be that the four weeks becomes a key factor in how Saturday night ends?"

About 12,000 fans will be allowed into the Alamodome to watch, though Alvarez's trainer Eddie Reynoso has warned Smith the Mexican support will make it sound like 100,000 are there.

Smith could draw comfort from the fact boxing has been kind to underdogs in the Covid-19 era, with the likes of Dillian Whyte and Vasyl Lomachenko falling to shock defeats.

"I am picking Canelo but I haven't been 100% strong all week," Bunce added. "It's the year of the upset after all."

Costello added: "I think Canelo wins it on points. At the highest level he has shown he can win on the back foot and on the front foot. Also he takes a hell of a shot.

"I don't see Smith being outclassed when I think of his size and quality. This would be right up there as one of the greatest single wins by a British fighter if Smith pulls it off.

"I'll take you back to a phrase from the great trainer Virgil Hunter. 'Some boxers have a great performance in them that they haven't yet produced.'

"Is Saturday night that night for Callum Smith?"