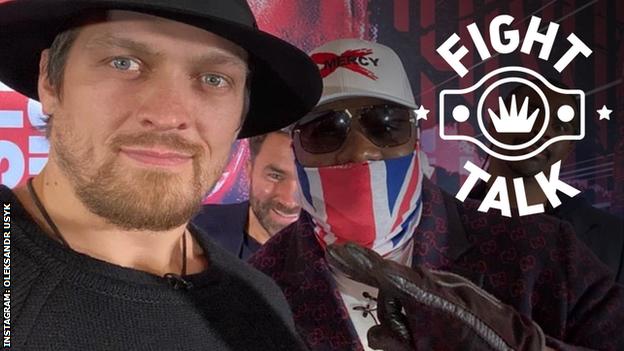 In this week's Fight Talk, we look ahead to Saturday's blockbuster heavyweight clash between Oleksandr Usyk and Derek Chisora.

There's an appearance too from Briton Billy Joe Saunders, who says he still wants to face Saul 'Canelo' Alvarez next year, and there's the lowdown on the injury that appears to have played a part in Vasyl Lomachenko's surprise defeat by Teofimo Lopez.

Oleksandr Usyk and Derek Chisora go toe-to-toe on Saturday at Wembley Arena in London. And we cannot wait.

Questions about both men will be answered.

In Ukraine's Usyk, there is a gifted fighter who dominated the cruiserweight division, winning all of the major world titles with his slick and almost flawless style.

But can he do it with the big boys of the heavyweight division? If he wins, he'll be pushing for his WBO mandatory shot against Britain's heavyweight champion Anthony Joshua.

Chisora is a fighter enjoying a golden period in the twilight of his career, particularly since he linked up with David Haye, a former opponent and now his manager.

But having been in countless wars over his professional career, does the Londoner have much gas left in the tank? If he does, then a victory for 'Del Boy' surely puts him in world title contention.

Chisora says he will give Usyk "the fright of his life" on Halloween night but he goes in as a heavy underdog with the bookmakers. And most fans agree… 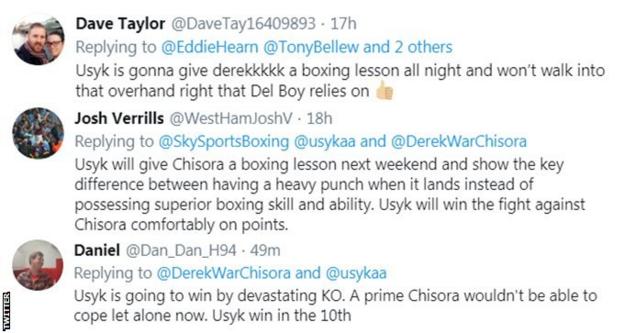 But this is heavyweight boxing. Anything can happen.

It's an intriguing match-up between two very different boxers, and Usyk and Chisora are just as entertaining outside of the ring - the pre and post-fight verbal exchanges are something to look forward to.

Throughout his training, Usyk has been trolling Chisora with these hysterical and bizarre videos…

And after months of bellowing "Derek, I'm coming for you", Usyk could finally change his catchphrase to "I'm here"…

There's no predicting what will happen but there'll be more weird and wonderful clips for us to enjoy come Sunday.

This year could have been so different for WBO super-middleweight champion Billy Joe Saunders.

In March, he was close to signing a big-money fight with Mexican superstar Saul 'Canelo' Alvarez.

Beating Canelo would have catapulted Saunders to global stardom and up the pound-for-pound rankings.

But Saunders, like many fighters in the sport, felt the impact of the coronavirus pandemic. The Canelo bout did not take place and the fighters' two teams were unable to rearrange it for later this year.

This week, Saunders announced he will be defending his title instead against former world-title challenger Martin Murray at Wembley Arena on 4 December. 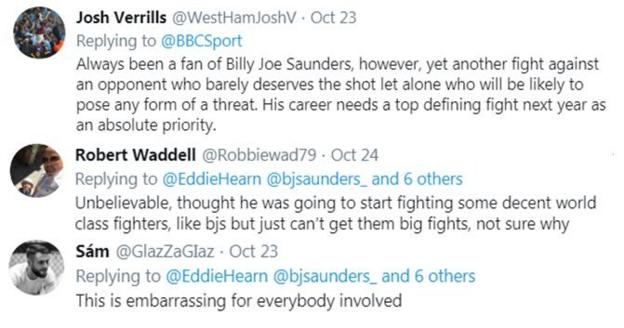 Unbeaten in 29 fights and rarely troubled in those encounters, Saunders believes time is still on his side and that he will be involved in competitive fights against elite level boxers next year.

And he also says he's eyeing up a bout with Canelo in May.

"I'm still fresh, I can go on potentially for as long as I want," he told IFL TV.

"I can probably say that, even now, fighters who have been in the game two or three years are not as fresh as me, they've been in wars."

In perhaps one of the biggest boxing upsets of the year, American Teofimo Lopez beat Vasyl Lomachenko earlier this month to become the undisputed lightweight champion.

This week, Lomachenko's manager caused a stir by claiming the Ukrainian went into the fight with a shoulder injury.

"If it's possible, we would like to have the rematch," Klimas added.

As you might expect, blaming an injury after a loss didn't go down too well with fight fans…

And it didn't go down well with Lopez, either.

"I was coming into this fight injured as well, if you want to talk about injuries, but I didn't make excuses," the 23-year-old champion told ESPN SportsCenter.

"As someone who was considered the number one pound-for-pound best boxer in the whole world, to use that excuse, it just looks more bad on him than anything else."