In this week's Fight Talk, world heavyweight champion Anthony Joshua calls for Britons Anthony Yarde and Joshua Buatsi to get it on and we discuss other options for Yarde after another knockout win on Saturday.

We also look at the super-fight between lightweight champions Vasyl Lomachenko and Teofimo Lopez, the innovate drive-in boxing show heading to Sheffield in November and heavyweight Oleksandr Usyk has yet another message for Briton Derek Chisora.

'The lion Yarde against the lone wolf Buatsi'

With no crowds allowed in London's York Hall on Saturday night, the sound of Anthony Yarde's menacing right hand was all the more audible after the light-heavyweight stopped Dec Spelman in the sixth round.

The chant 'Lions in the camp' from Yarde's corner echoed around the venue as the Londoner moved to 20 wins, 19 by knockout.

It was a professional and solid performance from Yarde in his first fight since his father and grandmother died with Covid-19.

The one blemish on his record is a defeat to Russian Sergey Kovalev in a WBO title fight in August 2019.

Yarde will have learned a lot from that loss, but is he ready for another world title shot?

A clash against Dmitry Bivol, the WBA Super champion, or WBC title-holder Artur Beterbiev, has been mooted.

And after his win on Saturday, Yarde said that an all-British dust-up with Buatsi is "going to happen" at some point.

Yarde-Buatsi is a fight that certainly whets the appetite of Britain's unified heavyweight champion Anthony Joshua.

"The lion Yarde against the lone wolf Buatsi. Two wild animals coming together to slug it out.

"One is an Olympian, the other is an east London-bred fighter from the Peacock Gym. So different."

With Yarde signed to Warren and Buatsi with Eddie Hearn's Matchroom Boxing, it won't be an easy one to make.

But there is some hope after the two rival promoters recently agreed to put their differences aside and discuss cross-promotional fights.

"Eddie was going on holiday and when he came back we were going to meet," Warren said.

"I don't know if he's still on holiday, I have no idea. But obviously I'm not going to chase him."

If it does happen, Buatsi - who has won all 12 of his professional fights - will go in as the favourite. But some fans think Yarde could pull off the win…

The unified lightweight bout between two elite fighters is a clash hardcore boxing fans around the world have been clamouring for, but one which may also bring new audiences to the sport…

A reported 396 wins and one loss as an amateur, including gold medals at the 2008 and 2012 Olympics. After 15 fights as a professional, the Ukrainian is already a three-weight world champion.

At 23, American Lopez, is nine years younger than his opponent but has already notched up 15 straight wins and is making the first defence of his IBF title.

He's undefeated, he's super-confident - and he's not there to make up the numbers.

Two men, scrapping in a Sheffield car park on a Friday night, welcome to drive-in boxing.

With fans unable to attend sporting events because of Covid-19 restrictions, promoter Eddie Hearn was able to host fights at the Matchroom Boxing headquarters in Essex, while Frank Warren has used TV studios and venues in London.

But other small hall promoters have struggled to put on boxing shows without a live gate.

Promoter Denis Hobson, however, may have the answer after announcing that Tommy Frank and Kyle Yousaf will contest for the vacant British flyweight title in the car park outside Sheffield Arena 20 November.

A similar drive-in boxing event was held in Dusseldorf, Germany, in July... 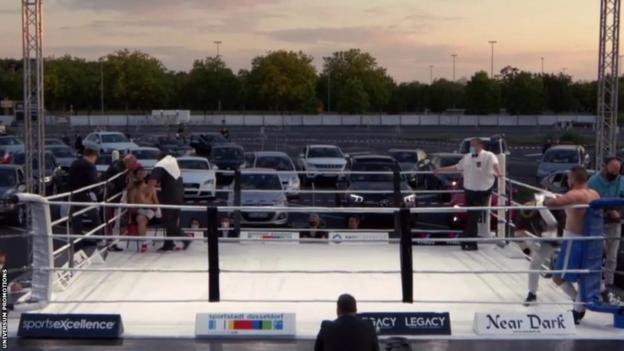 Fans in the city will be able to purchase tickets and watch via the comfort of their cars. They had best hope that Chris Eubank doesn't turn up, in the front row, with his trademark truck from back in the day... 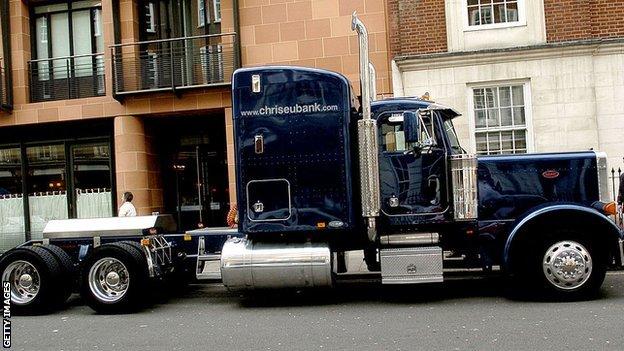 And finally, here is yet another clip of Oleksandr Usyk saying hello to Briton Derek Chisora...

The coronavirus pandemic might have caused their heavyweight fight to be postponed, with a new date yet to be announced, but Ukrainian Usyk keeps reminding us that Chisora is on his mind.

In case you missed it, here is a clip from last week...

And one from earlier this month...