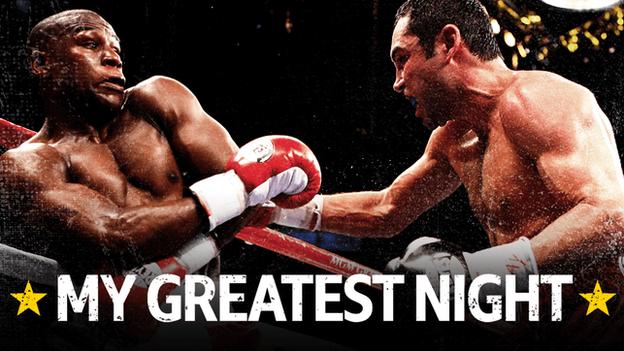 The BBC Radio 5 Live Boxing duo of Mike Costello and Steve Bunce have spent decades covering fights at small hall shows, arenas and colossal stadiums in countries all over the world. BBC Sport asked them to recall their greatest night.

"The World Awaits" it said on the posters. The Super Bowl of boxing was another label.

Yet, as Joe Calzaghe, Ricky Hatton and David Haye were holding or building household-name status in the UK, there were fears elsewhere that their sport's appeal was waning. "The Fight To Save Boxing" ran the headline on the front cover of Sports Illustrated in the US.

For the first week of May 2007 in Las Vegas, with Floyd Mayweather set to challenge Oscar de la Hoya for the WBC light-middleweight title, any notion of crisis seemed an exaggeration.

Fans queued for six hours just to see the weigh-in. Never, in a quarter of a century covering monumental events in Vegas, have I encountered such a buzz of anticipation spreading up and down the Strip.

Working alongside me was the former world super-middleweight champion Richie Woodhall and, in measuring the magnitude of the fight, we would talk of how many of the housekeeping staff at the fight hotel, the MGM Grand, pressed us for an opinion.

As I wrote on this website back then: "Richie was stunned to be badgered by the bearer of bed linen on leaving his hotel room the other day. She hit him with the two questions everyone around here seems to be asking: 'Where are you watching the fight?' and 'Who's gonna win?'"

It was to be the beginning of 10 years in which Mayweather generated well over a billion dollars in pay-per-view TV revenues and the fight that accelerated his transformation from brilliant world champion into boxing superstar.

De la Hoya had already made the transition and on the weekend of Cinco de Mayo, marking the anniversary of a famous Mexican victory over French empire forces, the sport's most charismatic commodity carried Hispanic hopes into the ultimate good guy-bad guy clash.

Between them, they had featured in more than 40 world title fights and a poll of 20 prominent fight figures in The Ring magazine favoured Mayweather 12-8; in Boxing News, Nigel Benn, Steve Collins and Frank Warren all went for De la Hoya.

Beyond the tribal rivalry, there were significant implications for the sport as a whole. Sports Illustrated described the showdown as "boxing's last gasp", adding: "There may never again be a time when boxing penetrates this country's indifference and causes a viral, all-consuming hubbub."

The piece also referred to the growth in popularity of mixed martial arts, with the UFC in particular appealing to a younger demographic while boxing's fans "wonder what email is".

Tickets for the fight had gone on sale four months earlier and sold out in three hours. A master-class in hype helped to generate a pay-per-view haul of 2.4 million buys, a record at the time.

The four-part series followed Mayweather and De la Hoya for weeks beforehand at home and in the gym and provided unprecedented insight, winning an Emmy award in the process.

There was intense focus on Floyd Mayweather Sr, who had been training De la Hoya for around six years and was said to be demanding a fee of $2m to collaborate in the dismantling of his son's 37-fight unbeaten record. Negotiations faltered and Freddie Roach was hired instead.

Mayweather had his uncle Roger in his corner. Fight week offered my first experience of watching Mayweather close up, with the media invited to his newly opened gym not far from the Strip. The breathtaking mix of chemistry and choreography between trainer and boxer on the pads has long since gone viral online but back then the cameos were reaching a new, much wider audience.

There were murmurs in the gym that day, from some seeing it for the first time, that such sessions were pointless, that the moves and combinations would never be replicated in the ring. But fluency, timing and pinpoint accuracy were all key elements in Mayweather's make-up and the pad-work was an important means of sharpening the tools.

He made us laugh, too. Two fights earlier, De la Hoya had been beaten by Bernard Hopkins with a wicked body shot in the ninth round. Mayweather's sardonic reconstruction of De la Hoya on his knees, writhing in agony and slamming his glove into the canvas, was picture-perfect.

Later, as the gym was cleared and only broadcast media remained, Mayweather was asked by a TV interviewer how much cash he was carrying. He was handed a rucksack and pulled from it three thick bundles of $100 bills.

At the weigh-in on the Friday afternoon, a crowd of 7,000 were admitted free of charge into the MGM Grand Garden Arena and a largely Hispanic, pro-De la Hoya tumult turned the ceremony into the kind of must-see event replicated by promoters to this day.

On Saturday afternoon, the Sports Book (the betting area) at the MGM Grand was crammed as the giant screens showed the favourite Street Sense winning the Kentucky Derby, with the Queen in attendance at Churchill Downs.

Helen Mirren, whose recent portrayal of the Queen had won her an Oscar, was ringside for the fight, along with Michael Jordan, Denzel Washington, Leonardo di Caprio, Jack Nicholson, Russell Crowe, Usher and Senator John McCain, a renowned fight fan whose run for the US presidency ended in defeat by Barack Obama the following year.

Accompanied by the rapper 50 Cent, Mayweather appeared for his ring-walk bedecked in a sombrero and a gown which - like his trunks - carried the green, white and red colours of the Mexican flag. It was Mayweather at his taunting, mocking best.

Part of Roach's plan for De la Hoya was to drive home the left jab into Mayweather's chest, in an attempt to force Mayweather back and create opportunities for follow-up attacks. But I agreed with Woodhall in his assessment that Mayweather was generally in control, picking and varying his punches with back-foot deftness, and we were surprised when he was awarded only a split-decision victory.

Given it was Mayweather's first venture into the 11-stone division, it ranks as one of his best performances.

He would go on to beat Ricky Hatton, Juan Manuel Marquez, Miguel Cotto, Saul 'Canelo' Alvarez and Manny Pacquiao - some record, although to his detractors the opposition was either too young or too old at the time.

With an instinct based on defence, Mayweather needed his dance partners.

But they - and the sport - needed him too.