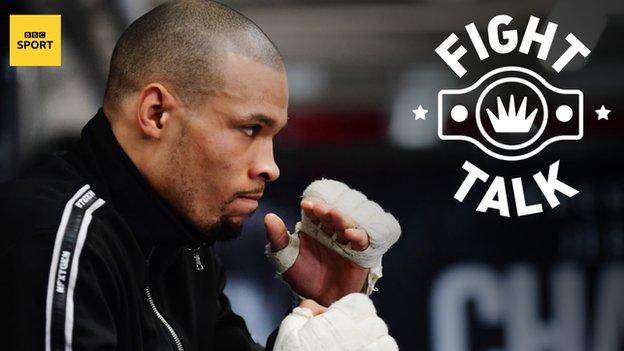 In this week's Fight Talk we look at Chris Eubank Jr as a potential opponent for Saul 'Canelo' Alvarez after Billy Joe Saunders rules himself out of a September bout, Prince Naseem Hamed's son bids to follow in his father's footsteps and Luke Campbell vows to knock out Ryan Garcia.

And it seems he means it, adding that "not even a billion pounds" would change his mind.

Saunders was close to agreeing a deal to fight Canelo earlier this year before the coronavirus outbreak.

And with the Mexican Canelo still searching for his next opponent, Saunders told the Athletic that a September bout would not give him enough time to be fight-ready.

"Let me get ready, let me win," Saunders said.

He also told IFL TV that his training has been hampered by the Covid-19 lockdown.

"There were no gyms, nothing for me to go here and there to train. To fight that magnitude of fight you need to 110% ready," Saunders said.

But even with Saunders ruling himself out, there's still every chance there could be a sixth British opponent for Canelo.

Eubank Jr was last in action when he beat Matt Korobov by technical knockout in December, the Russian suffering a shoulder injury in the second round.

Former world-title challenger John Ryder, who lost to Liverpool's WBA super-middleweight champion Callum Smith in November, is doing what he can to reel Canelo in…

He told Sky Sports that his promoter Eddie Hearn has made contact with Canelo's team. 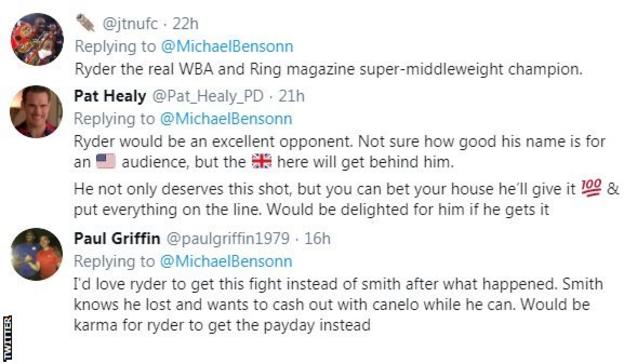 And Smith, who was also in the running to take on Canelo earlier this year, is still game for the fight.

"I'd take it in a heartbeat," he told Chris Mannix's Sports Illustrated podcast.

Of course, Canelo has other options. A trilogy fight with Kazakhstan's Gennady Golovkin might not whet the appetite with hardcore fans, but would still be lucrative for both boxers. Although that fight is unlikely to happen behind closed doors.

Boxing Scene reported that Ukraine's Sergiy Derevyanchenko has already been offered a contract to fight Canelo, while Canada's David Lemieux and Japan's Ryota Murata have also been linked.

Prince Naseem Hamed is undoubtedly one of the greatest British fighters of all time. The Sheffield-born former world featherweight champion's flamboyance and arrogance both in and out of the ring turned him into a huge pay-per-view star.

And now there is a new prince mapping his own journey to the throne as Hamed's 20-year-old son, Aadam Hamed, is set to turn professional.

Frank Warren, who promoted Prince Naz, said: "If he has his old man's ability, then he should be OK."

Meanwhile, Matchroom Boxing's Eddie Hearn highlighted the offspring of other famous boxers who have gone on to carve out their own careers.

"Conor Benn, with us, has been fantastic and Chris Eubank Jr has been great entertainment over the years," Hearn said.

"Naz's son? Let's see what he's got. It's hard for anybody to follow in the footsteps of a successful father."

Lightweight contender Luke Campbell must be up there with the best active British fighters not to win a world title. The London 2012 Olympic gold medallist has twice challenged for world honours, losing to Jorge Linares in 2017 and Vasiliy Lomachenko in August 2019.

The WBC has now ordered Campbell to fight Ryan Garcia for an interim belt, with the winner going on to contend for a full world title.

Garcia, 22, is one of the hottest prospects in boxing and regularly entertains his already huge social media fanbase (over 6.5m Instagram followers) with clips like this...

Time will tell if Campbell-Garcia materialises, but the Brit and his trainer are both up for it...

Campbell told Boxing Social that he'll knock out Garcia, while some boxing fans on Twitter questioned whether Garcia would risk his undefeated record of 20 consecutive wins by taking on someone as experienced as Campbell.

But the American put those fans straight...