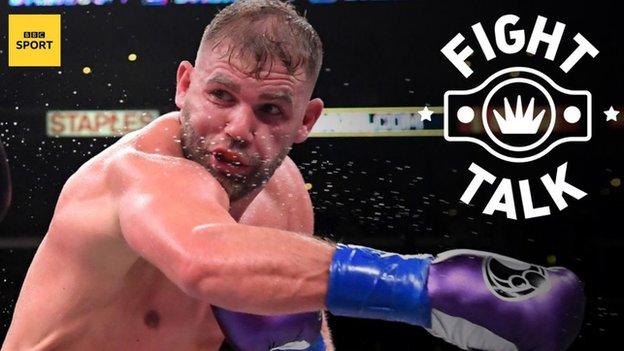 In this week's Fight Talk we look at who Billy Joe Saunders could face next, Jamie Foxx gets in shape to play Mike Tyson in a biopic, Ryan Garcia goes public in his feud with promoter, Olympian-turned-wrestler Anthony Ogogo bulks up and one-year-old Bertie shows off his unbelievable boxing skills.

Who should Saunders fight next?

The coronavirus pandemic, and subsequent postponement of all boxing, may well have cost Briton's Billy Joe Saunders the biggest payday of his career.

The undefeated WBO super-middleweight champion had almost agreed a mega-fight with Mexican superstar Saul 'Canelo' Alvarez before the lockdown kicked in.

And with boxing now preparing to make its return, the Canelo fight does still remain a possibility for Saunders. But what are the other options?

His promoter Eddie Hearn told IFL TV that Saunders could face one of three fighters.

First, there's WBO middleweight champion Demetrius Andrade. There is already some history and a bit of needle between the American and Saunders. The two were scheduled to clash in 2018 but the fight was called off after Saunders returned an adverse finding in a Voluntary Anti-Doping Association (Vada) test and was refused a licence.

Talking of history, another potential fight for Saunders, could be a rematch with fellow Briton Chris Eubank Jr. The two fought back in 2014, Saunders winning on a split decision. But that only tells half the story - there seems to be genuine animosity there. Personal insults that cross the line and weigh-in scuffles would not be surprising if the two fought again.

But an all-British unification fight with WBA super middleweight champion Callum Smith seems to be the most obvious choice. Both fighters are at their peak but could also do with a career-defining win. Saunders laboured to a victory over over Marcelo Esteban Coceres in his last outing, while Smith was also disappointing in a close points win over John Ryder.

Saunders v Smith is the fight the fans want to see…

Get the popcorn ready, Hollywood actor Jamie Foxx has confirmed that he will play the part of Mike Tyson in a film about the former heavyweight champion's life.

But there are two things that Foxx will need to master if he's to pull off an Oscar-winning performance.

First, that incredible physique which led to 'Iron Mike', aged 20, becoming the youngest ever heavyweight champion in 1986 and then going on to demolish opponent after opponent with devastating knockouts.

Well, it seems Foxx is already in pretty good shape…

And then there's that slightly high-pitched voice which is unique to Tyson.

And Foxx has that down to a tee also…

'You're supposed to be my promoter' - Garcia slams De la Hoya

What do you do if you don't feel appreciated by your boss?

Well, if you're undefeated American lightweight Ryan Garcia then you make your grievances known to your 409,000 Twitter followers.

Golden Boy Promotions were hoping that Garcia would top a 4 July card, their first fight night since the coronavirus pandemic halted boxing. But according to ESPN, Garcia pulled out because he wanted a purse of $500,000 (£402,000), with Golden Boy offering the prospect $200,000 (£161,000).

So Golden Boy CEO Oscar de la Hoya announced on Twitter that welterweight Vergil Ortiz Jr would now headline their first card back, but he name-checked Team Garcia for not accepting a fight…

That did not go down well with Garcia, who replied: "You do realise you're supposed to be my promoter not hater right?" - a tweet which has since been deleted.

This is not the first time Garcia and Golden Boy have aired their dirty laundry in public - both parties were involved in public dispute in September when negotiating a five-year-contract.

Perhaps one of the sadder boxing stories of recent years, Ogogo was destined for great things after winning bronze at the 2012 London Olympics.

He then signed to the US promoters and was being tipped as a future world champion. But his career was cut short after suffering a horrific eye injury against Craig Cunningham in 2016.

But Ogogo has put that behind him and is now focusing on a whole different career after he signed for American wrestling company All Elite Wrestling in October 2019.

And it appears the slick former middleweight has been eating his greens. Ogogo has gone from this in his Olympic days...

To this most-recent body transformation he shared on social media…

And finally, this is undoubtedly our favourite boxing clip of the week.

One-year-old (yep, you read that right) Bertie shows off his unbelievable boxing skills. Already a box-office star in the making…