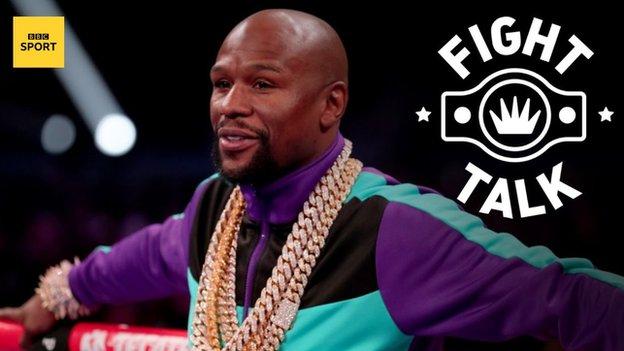 In this week’s Fight Talk, we look at Floyd Mayweather dismissing rumours he will return to boxing, Conor McGregor accepting Oscar de la Hoya’s “challenge", which former heavyweights have been inspired by Mike Tyson to take the sport up again, how Daniel Dubois would fare against Deontay Wilder and ask the question: 'Is Oleksandr Usyk heading to Albert Square?’

Over the past couple of weeks, rumours circulating on social media have suggested that pound-for-pound great Floyd Mayweather could return to the ring, with fellow American Adrien Broner a potential opponent.

Mayweather has been retired since his win over Irishman Conor McGregor in 2017.

This week, the American dismissed those comeback rumours.

He also referenced his uncle and former trainer Roger Mayweather, who died aged 58 in March, saying: “If this guy [Broner] wants to fight Floyd, I say 'you guys sell out little arenas and do some little baby moves, not bad, but I'm older and a lot wiser, meaning I don't want to end up like my uncle Rog'.

"A lot of fighters don't know when to give up.”

So, don’t expect to see Mayweather, who won all 50 of his professional contests, in a world title fight again.

But he has not completely ruled out a rematch with UFC star McGregor, who was making his boxing debut in their much-hyped first fight.

"Even if we did it again, it's entertainment and it's business - I'm not boxing no boxers,” Mayweather said.

Meanwhile, McGregor may have his eyes set on another retired world champion.

Fighter-turned-promoter Oscar de la Hoya, who last fought more than 11 years ago, was asked by CBS Sports' State of Combat podcast what would happen if he took on McGregor.

"Oh come on, brother. Two rounds. One thing about me is I went for the kill, always,” he said.

And McGregor, as always, didn't shy away from a response…

Lockdown has a habit of making you forget what day it is, but it seems as if the boxing world has travelled back in time.

We told you last week how former world champion Mike Tyson, 53, was planning to fight again, albeit in charity exhibition fights. Well, this week several legends of the sport have announced their planned returns to the ring.

Now, bear with us, as there’s a lot to get through…

Holyfield has two wins over Tyson. The second was the infamous Las Vegas night in 1997, when Tyson bit his fellow American’s ear and was subsequently disqualified.

Holyfield told TMZ that he is “down for a third fight with Tyson“ but would prefer a fourth bout with 52-year-old Riddick Bowe, who holds a 2-1 advantage over the former two-weight undisputed champion.

Then Shannon Briggs, a spring chicken at 48, told IFL TV that he’ll fight Tyson for $25m. But he also mentioned a couple of other former heavyweight champs from a slightly later era, saying he wants to take on Wladimir Klitschko, and break Briton David Haye’s jaw…

Are you still with us? Good. It gets stranger.

Briton Danny Williams, who beat a well-past-his-prime Tyson in 2004, called for a rematch. And New Zealand rugby player Sonny Bill Williams, who is unbeaten in seven boxing bouts but has been inactive since 2015, said it would "be an honour" to fight Tyson.

And, finally, former professional fighter John Fury, the 55-year-old dad of WBC champion Tyson Fury, said he is wants a piece of ‘Iron Mike’ too.

He said: “I’ll fight Mike Tyson; he’s making a comeback. I know he mentions my boy’s name every five minutes, but here I am, John Fury is hiding from no man, not even the king of the old men Mike Tyson.

“I will fight Mike Tyson; I will not be denied."

Right, that’s it. We think. To summarise, Mike Tyson released a five-second clip of looking unbelievable on the pads and saying he’d fight for charity.

And then it all got out of hand.

British heavyweight Daniel Dubois wasn't even born when most of those fighters were in their heyday. But the 22-year-old is making waves in the division. So much so, that his promoter Frank Warren said he could take on former world heavyweight champion Deontay Wilder in 2020 if he wins his next bout.

Dubois is scheduled to face fellow Briton Joe Joyce on 11 July, a date that is likely to change because of the coronavirus pandemic.

But the Londoner shared his promoter’s confidence when Seconds Out asked him if he would take on American Wilder, who lost his belt to Tyson Fury via stoppage in February…

Some boxing fans give Dubois, who is unbeaten in 14 fights, a chance against Wilder but the general feeling is that it is way too early in his career. And that he shouldn’t be looking past Olympic silver medallist Joyce...

Is Usyk set for Albert Square?

And finally, who fancies seeing Ukrainian Oleksandr Usyk pulling pints in the Queen Vic or dealing with your dirties in Walford's most well-known laundrette? 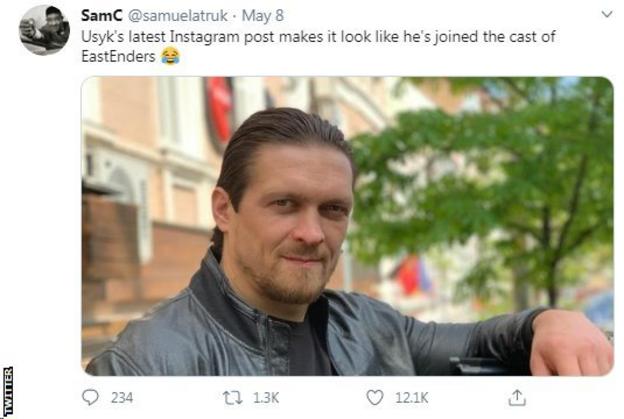