In this week's Fight Talk, we look at how a five-second video of Mike Tyson hitting the pads became a viral hit, Eddie Hearn and Frank Warren's versions about the only time they've crossed paths, Tyson Fury saying he'll fight on until 40 and Liam Smith on why he won't chase a bout with Kell Brook.

There's only one place to start this week.

More than 33 years later, he can probably still boast that he is the 'baddest man on planet'.

Tyson, 53, is living proof that class is permanent after he shared an incredible video of him working the pads.

In case you missed it, here it is… (warning, you'll probably find yourself a little winded just by watching those two lefts to the body)…

Celebrities from boxing, MMA and entertainment were quick to voice their admiration.

Wrestler-turned-actor Dwayne 'the Rock' Johnson commented: "To the gym I go," while UFC star Khabib Nurmagomedov simply put: "Can't believe it. This is another level."

Movie star Will Smith called him "my hero", and podcast king Joe Rogan used some more colourful language to express his excitement.

Here are some more reactions to the video… 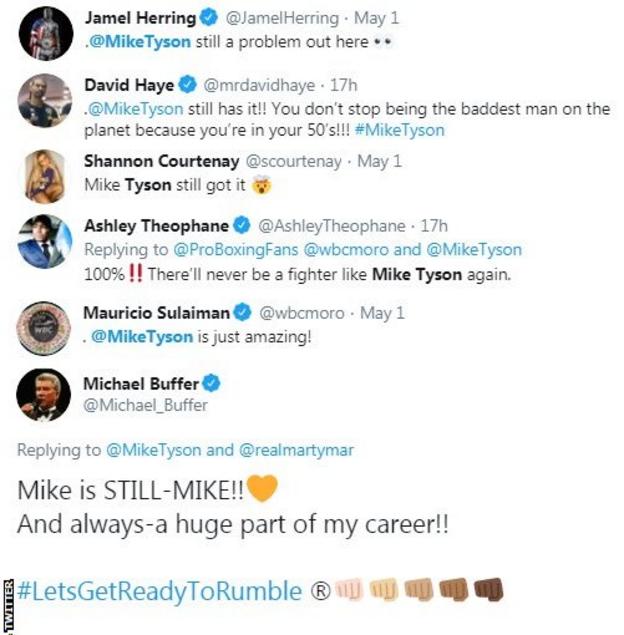 So why has Tyson laced up the gloves? Well, it's not just for show.

In an Instagram live with rapper T.I. he revealed he is planning a return to the ring for charity.

"I've been hitting the mitts for the last week," Tyson said.

"I want to go to the gym and get in shape to be able to box three or four-round exhibitions for some charities and stuff."

Usually, a former world champion announcing his return to the ring when in his fifties wouldn't go down too well with boxing aficionados.

'Eddie Hearn didn't wink at me'

Lockdown makes us ponder some of the bigger questions in life, such as did Matchroom Boxing promoter Eddie Hearn really wink at his Queensbury Promotions counterpart Frank Warren outside a London restaurant, or not?

Astonishingly, two of the biggest players in British boxing have never actually met or even had a conversation.

Hearn has revealed that the one time he bumped into Warren was on a London street, after he had just signed a new television deal with Sky.

"And it was one of those really awkward moments where it was like, do we shake hands?

Warren confirmed to the Boxing Social that the brief encounter did take place, but added: "He sort of seemed to go further and further across the pavement as he walked past. He didn't wink at me, that's for sure. There was no winking."

As fans make their own mind up about 'Winkgate,' there are some who still can't believe the two have never actually spoken to each other, but would love to see them work together… 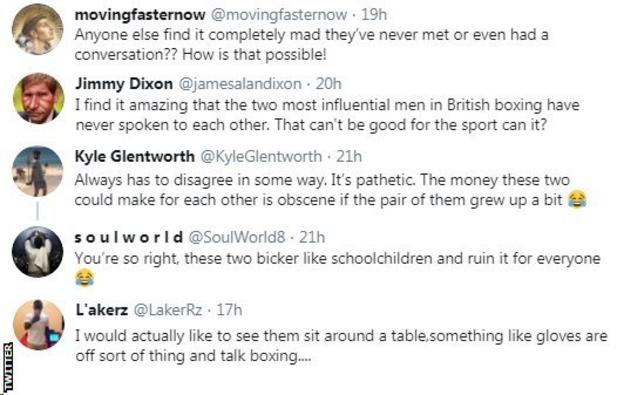 Fury wants to fight until he's 40

You might recall WBC heavyweight champion Tyson Fury saying he has one or two more fights left in him before he retires.

Well, the 31-year-old Briton has changed his mind.

Fury, who beat American Deontay Wilder for the title in February after their first bout ended in a draw, told ESPN that he plans to fight on for another nine years.

"I've been thinking about it, and there isn't much else to do anyways. So yeah, I may as well keep fighting. I don't see anyone out there that can challenge me anyway."

Fury is scheduled for a third fight with Wilder once boxing resumes. And news that retirement is a long way away should please his fans. But, being the wind-up merchant he is, some are unsure whether they should take the 'Gypsy King's' words at face value… 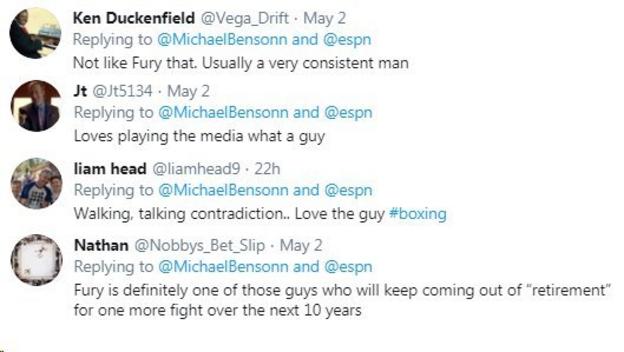 So as we sit back and wait for boxing to return, all we can do is draw up a wish list of fights we'd like to see.

It might not be at the top of the list, but an all-British affair between Liam Smith and Kell Brook would spark interest.

Both fighters are former world champions, although both are probably past their peak. The winner will most likely get another world-title shot. The loser, certainly if it's Brook, could call it a day.

Smith had some words for Brook this this week, telling Matchroom Boxing's The Lockdown Tapes: "It's a fight I want but I'm not going to embarrass myself by chasing him.

"I'm not digging him. But he's not that good and he doesn't have a world title. But I want to fight him because he's a decent name and it's a very good fight, especially for the British public."

But Smith added that a fight with American two-weight world champion Jessie Vargas is more likely to happen next.