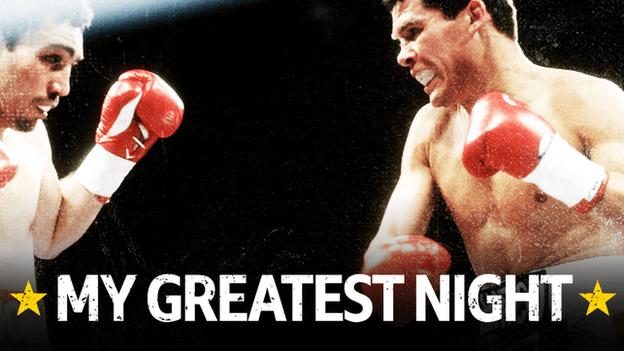 The BBC Radio 5 Live Boxing duo of Mike Costello and Steve Bunce have spent decades covering fights at small hall shows, arenas and colossal stadiums in countries all over the world. Over the coming weeks on BBC Sport, Costello - and first Bunce - will recall their greatest night next to a ring.

At close to midnight on a long-forgotten February night, the guards brought out the cut, bruised and guilty man for one final piece of ridicule in front of a frothing crowd.

The poor American, holding an ice pack to a swollen cheek, had no chance as he was ushered into a seat to face one final inquisition.

I was in Mexico City in the filthy bowels of the majestic Azteca Stadium on a crisp night in 1993 and Greg Haugen, the American, was not a captive, just a beaten and bloody boxer.

"This American dog had no chance to beat me," said Julio Cesar Chavez to roars and hoots from the 300 people at the post-fight press conference.

In the middle of Haugen and Chavez on the top table was Don King, waving a tiny Mexican flag in one hand and the stars and stripes in the other. The ultimate political chancer, King, was the promoter of the show that had finished with Haugen rescued by the referee in round five. It was not a fight or a night for the squeamish, trust me.

A record crowd of 132,247 had paid to witness the fight between Haugen, a former world champion, and Chavez, unbeaten in 84 fights and holding a world title at his third different weight.

The stadium and its blood-thirsty horde was made for the brutality King promoted that night and in other fights the great Michael Nunn needed one round, Gerald McClellan two, Terry Norris two and Felix Trinidad four. A shoeless worker was scrubbing the blood off the canvas after each fight.

At noon on the day of the chaos I had gone over to the Azteca to get a look, get a feel for the stadium. The final touches to the raised ring were being made, armed guards wandered through the seats and in the dry moat that surrounded the pitch, more police strolled, this time with dogs on chains.

I crossed the moat on a rickety plank from the football pitch and reached the base of the sloping wall of the stands. It was vast. I took off for the top, climbing slowly as the height and altitude and a long night of beer and steak at a King function the previous evening started to take its natural toll.

At the very top of the concrete seating rows there was a hand-painted sign with the price of beers and snacks; for just a few pesos more than a beer a local could get a ticket for the fights, a seat up there somewhere in the rare air of the noisy city of low fog, and from up there the ring was about the size of my thumbnail. Five hours later I was back and the place was transformed. It gets dark quick in Mexico City in February.

And then it all becomes a bit of blur.

The great Azumah Nelson narrowly retained his title with a win over Gabriel Ruelas. Norris stopped Maurice Blocker - a quality fight on paper, but Norris right then was a very special fighter. Nunn destroyed Irish Dan Morgan in just 179 seconds.

The Nunn win was expected and, as the ref waved it off, I heard the great Pat Putnam of Sports Illustrated, but who started his career as a newspaper man in Miami when a kid called Cassius Clay was losing his Bambi legs, pick up his phone and start his piece: "Over 132,000 showed up for Irish Danny Morgan's wake in Mexico City on Saturday night…" I thought it was real, the greatest intro I had ever heard, until his partner in endless ringside mirth, the equally masterful Ed Schulyer, started to laugh.

McClellan, one of the sport's most ferocious punchers, stood in front of me at one point, talking to a doctor. Gerald had won easily, but he had a headache. It was just a little Azteca aside.

And then Mr. T arrived. Yes, that Mr. T. I now knew why the seat next to me in the front row - so close that when fighters went to the far side of the ring I could only see their shoulders and heads - had a sticker on it that said: 'Mr. T'.

He worked his way through the crowd and to our position. He was wearing gold necklaces, swimming trunks and flip-flops. Mr. T would sit next to me for the Haugen and Chavez fight, a fight at the Azteca Stadium in front of 132,247 people. The Saturday before I had been in a school hall in Wembley for the quarter-finals of the National Schoolboy championships.

"They covered me in spit on the way to the ring and on the way from the ring," Haugen told me the next morning. They did, I could see it, and it wasn't the only bodily fluid that flew through the air.

Haugen was an excellent fighter and had only lost on points and to good fighters before his hammering that night at the Azteca. Haugen had added to his pain by insisting that Chavez had only beaten Mexican taxi drivers. Chavez had called him a dog in the week of the fight and did so again when Haugen arrived at the post-fight conference. Make no mistake, Chavez was a cold human being - brilliant, ruthless and bloodthirsty in the ring.

Both Haugen and Chavez have battled demons on and off since that night. Nunn served 16 years of a sentence for cocaine possession. In 1995 McClellan required emergency surgery to remove a blood clot from the surface of his brain and he still needs full-time care. Norris has suffered terribly from his fights. Murphy is a volunteer at a gym in Minnesota. Zoom Zoom Nelson remains Africa's greatest boxer. King is still promoting and waving flags. Mr. T still wears gold chains and pretends to remember sitting next to me at the Azteca. In March of this year I was due at a leisure centre near Milton Keynes to watch the quarter-finals of the Schoolboy championships.

The day after Chavez ruled as King of all Mexico - a song the Mariachi bands used as an endless serenade - I went to a bullfight with Angelo Dundee, the man who guided the great Muhammad Ali from the corner. "The bull has got more chance than Haugen had last night," Dundee told me. He was right - it was indeed a fantasy trip.