In the closing minutes of the biggest fight of his life, Ted Cheeseman wanted to be punched and punished.

As the blows smashed against his face and body he was thinking: "Stop me, knock me out." The tens of thousands of pounds he was being paid to put his unbeaten record on the line had already been gambled away. Not for the first time, he was essentially risking his life in a fight for free.

It was the rock bottom he needed. A year has now passed since his last bet, but when opening up to BBC Sport he says he fears many are currently "going through torture" in fighting addiction in coronavirus lockdown.

At just 24, Cheeseman already knows the stories Gamblers Anonymous meetings serve up. He has learned how people lose partners, access to children and houses. It is his view that a standout low point is needed to jolt an addict into truly decisive action.

His came in front of a packed O2 Arena in London, where he headlined the bill in a points defeat by Spain's Sergio Garcia in February 2019.

Thousands watched as Cheeseman stood post-fight, lost and beaten. None of them knew the lonely battle he faced outside the ring. All they knew was his dream of winning the European light-middleweight title had gone.

It was the sad climax to a fortnight during which he had gambled away his fight purse. He had won most of it back, only to then blow the lot once more - about £30,000 - before being cheered to the ring as the home fighter.

Recalling the late stages of the fight, he says: "My hands are down and I'm letting him hit me. In my head, I'm punishing myself. You have a million thoughts in the biggest fight of your career, and mine were about money. I realised I'd mucked my chance up.

"Gambling is like an up-and-down process. One day you lose five grand, you feel low, hate yourself, hate boxing, want to kill yourself - all of those emotions.

"The next day you go and win a grand. Then you think you can break the system, so your mood is up. Before the Garcia fight, the last five grand I had out of my purse I gambled the night before the fight, after the weigh-in.

"I thought: 'I'm in a European title fight, I have this money, I wasted all the rest, so it's either win or bust.' I can honestly say from my first fight in 2015 to my Garcia fight, I fought for free. Whether it was before the fight or in the weeks after a fight, losing the money always happened.

"When you're winning fights and earning money, you don't realise. Then defeat comes and I thought: 'I either gamble and my life goes to pot or I give up.'" 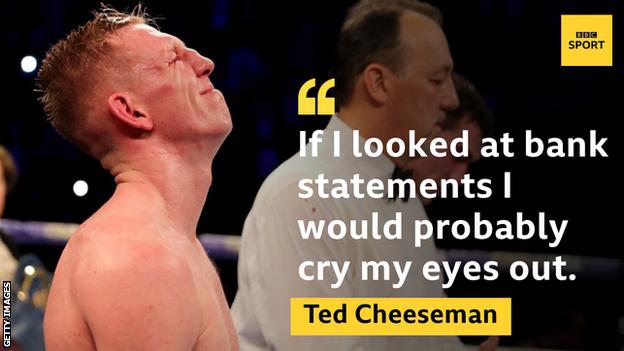 Cheeseman took trainer Tony Sims into a private room shortly after defeat by Garcia and laid bare his addiction.

He noticed how opinions of him changed with a single loss. The commentators and pundits who had once spoken of the "good pressure" he applied in fights now began to point to a recklessness. Few knew just how reckless he had been. He had gambled since his teenage years - but now, it had to be over.

Online sports betting, hours at the bookmakers and time spent standing at the fixed odds betting terminals which have been described as "the crack cocaine of gambling" were part of his routine, either after training or between sessions. He says he was prepared to bet "on anything".

"You are never, ever appreciative of money. I like buying nice clothes but those luxuries end up going out of the window because you end up thinking: 'Rather than buy something, I'll take that £500 in the bookies, double it and buy things with what I've won.' It never happens. You end up losing three times the amount.

"I wouldn't like to put a number on what I've lost. I had inheritances, all my fight purses and sponsorship money. The thing is trying to get over the regret.

"I try not to regret it. Sometimes you're in bed and you know you have to pay something that may not leave you short but will leave you low. Then you think: 'Wow, I had all this money and now I'm worrying about this bill.'

"If I sat and looked at my [bank] statements I'd probably cry my eyes out. That could be the trigger that sends me back to gambling."

In the weeks after his Garcia loss, Cheeseman staked about £20 on the Grand National, but he says he would ordinarily have bet thousands.

Since that day - 6 April 2019 - he has not placed a bet of any kind. He can now see the logical choices that are so easily missed when addiction has gripped a mind.

No longer is he looking for windows of opportunity around family life to sit in the bookmakers, and the result he says is a "better relationship" with his partner, Jenna, and quality time with his one-year-old son, Ted. 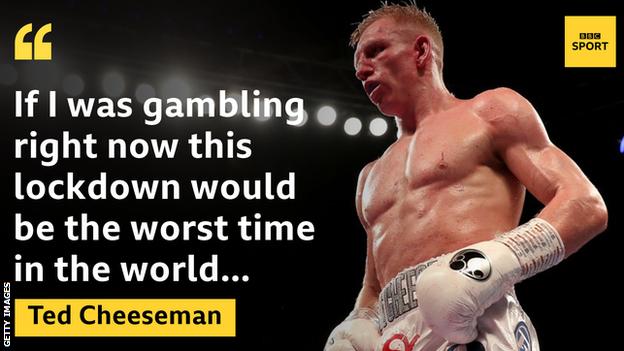 Others, though, continue to fight addiction. At the start of 2020, it was estimated there are over 300,000 problem gamblers in the UK.

The sporting lockdown brought about by the coronavirus pandemic has helped ease temptation for some, given there are few events to bet on. Earlier this month, one recovering addict told BBC Sport he sometimes finds himself hoping "football doesn't come back".

But GamCare - the UK's leading charity for problem gamblers - says contributing factors to the addiction, such as financial distress, isolation and boredom, are more prevalent during the shutdown of normal life.

Cheeseman is accessing his gambling support group through video calls and WhatsApp chats, but says others will now be suffering even more.

"I said to my partner a few weeks back that if I was gambling now this lockdown would be the worst time in the world," he says. "If you are a compulsive addict, you will bet on anything. If there were no sports to bet on you'd be on slots or roulette, and that's where you lose the most money all the time.

"So now, compulsive gamblers are probably smashing their money as they'll be going hard on things like slots or roulette to get their fix. I know a lot of gamblers will be going through torture right now. It doesn't matter if you have £10 to lose or a million. Mentally, if that's all you have to lose it gets you the same way."

A draw with Kieron Conway and defeat by British champion Scott Fitzgerald followed Cheeseman's loss to Garcia, who is now undefeated in 31 outings.

The 24-year-old's career has hit a bump in the road - but his youth and improved balance to life outside the ring offers hope for the future.

He had planned to move on to a healthy financial footing without the drain of his former addiction in 2020, but a postponed March bout - because of the coronavirus pandemic - means money from sponsors is his current income source.

Cheeseman is at least now looking to his family, future and fights with a year free of gambling under his belt.

"I am over the moon," he says. "My partner and my family are all happy. I'm trying not to make a big thing of going a year without a bet. No-one forced me to gamble - I did it myself.

"With help, I got back out of it - and now I have the opportunity to turn life around."

GamCare operates the National Gambling Helpline, providing information, advice and support for anyone affected by gambling problems. Advisers are available 24 hours a day on Freephone 0808 8020 133 or via web chat at www.gamcare.org.uk.

It also offers a range of free treatment across England, Scotland and Wales, as well as a moderated forum and daily chatrooms so that people can speak to others experiencing similar issues and seek support.