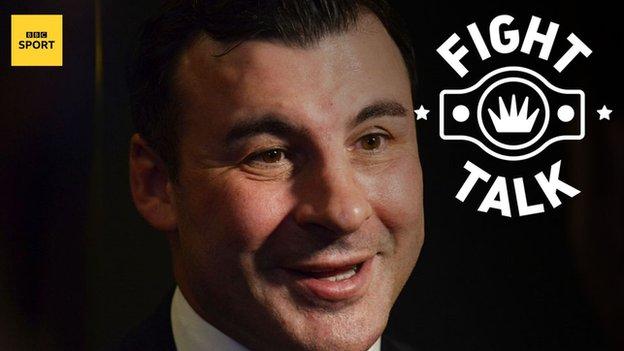 In this week's Fight Talk, we find out Joe Calzaghe's response after he was challenged to come out of retirement by Carl Froch, discuss whether Floyd Mayweather will become a world-class trainer and look at a classy Twitter exchange between Carl Frampton and his next opponent.

'I'm still living in his head'

And 13 years later - with both former super-middleweight world champions having long retired - Froch is once again calling out the Welshman.

Calzaghe, 48, hung up the gloves in 2008 with an unblemished professional record, winning all 46 of his bouts. He is considered by many as the greatest British boxer of all time.

And despite defeats by Denmark’s Mikkel Kessler and American Andre Ward, England's Froch was a superstar in his own right. You could never write him off.

But he does still like to stir things up a bit.

Speaking on his Froch on Fighting podcast, the former world champion, now 42, said Calzaghe would be "the right dance partner" to tempt him out retirement, warning that he would "flatten" his rival.

Froch added: "Have you seen the size of his head? I don't know why it's swollen up so badly. He looks like he's got high blood pressure. He looks a bit of a mess.

"So if he agreed to give me a fight, to come out of retirement - because of my cheek, and because of the way I’m speaking about him - then I’d definitely fancy a bit of that."

Froch's comments always spark a reaction from boxing fans. And scouring through Twitter, you'll be hard-stretched to find many (if any) who agree that Froch would have beaten Calzaghe when both were in their prime… 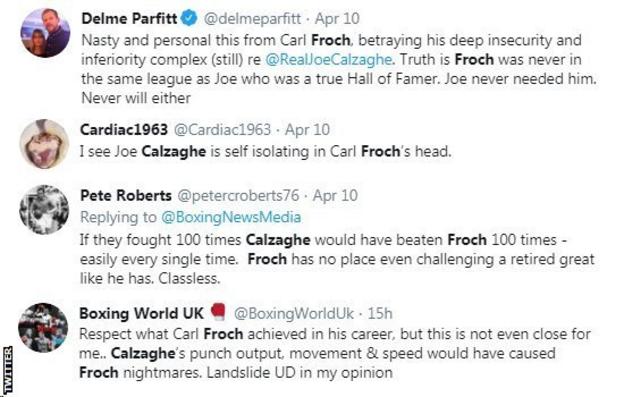 Unlike Froch, who now works as a television pundit, Calzaghe has generally stayed away from the limelight since retirement.

But he did respond to Froch’s comments and laughed off the suggestion of that fight ever happening.

"It’s mad; I'm still living in his head after all these years," Calzaghe told Talksport.

"I know what would have happened and I don't take much notice of what he says."

Frampton and Herring show each other respect

As the world battles the coronavirus pandemic, boxing is preparing the best it can for when the sport eventually returns.

One of many fights affected by the outbreak is Carl Frampton's quest to become a three-weight world champion against American Jamel Herring.

The Northern Irishman was scheduled to take on the WBO super-featherweight champion in June but promoter Frank Warren has said the bout is now likely to take place later in the summer or beyond.

But in a world where social media 'beef' and heated Twitter exchanges between fighters is the norm, it was refreshing to see a bit of class from the two boxers…

And it was duly appreciated by fans… 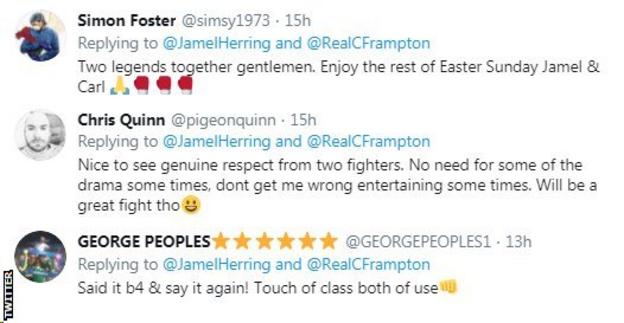 Will Floyd Mayweather be a good trainer?

He won all 50 of his professional fights, was a multiple weight world champion, and his name transcended the sport; Floyd Mayweather Jr was pretty much faultless as a pugilist.

And this week, the 43-year-old American announced he was going to take on the role of coach, saying he will become "one of the best trainers in the world" and take after his late uncle.

But will the qualities of one of the greatest fighters of all-time translate into those of a world-class trainer? Floyd has the knowledge and experience but does he have the temperament and patience to thrive in the corner? 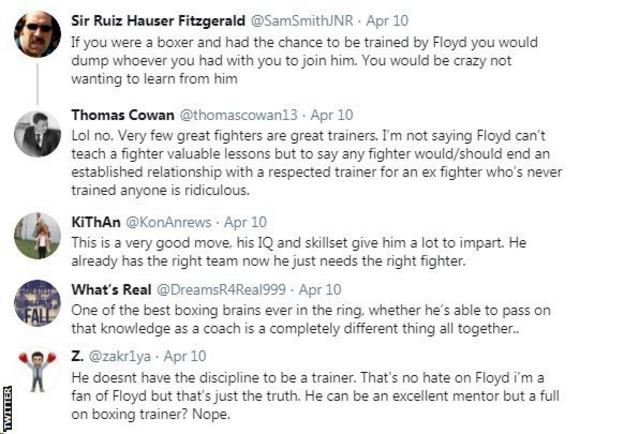 A toothless act by Maidana?

Now, it's not uncommon to keep hold of a souvenir to remember the good times. Maybe the cinema ticket from your first date. Or a pebble from that childhood trip to Margate beach.

But former two-weight world champion Marcos Maidana has taken it to a whole new level.

The Argentine lost to Mayweather in a close decision when the pair fought in May 2014, before earning a rematch just four months later, this time a much more comfortable win for the American.

But it was in that second fight that Maidana claims he knocked out Mayweather's tooth with a right hook.

And he's now had it made into a pendant to wear on a chain, posting a picture on Instagram with a caption which translates to: "The tooth of Floyd Mayweather that Marcos 'El Chino' Maidana will use in his chain"…

A bit of a blow for 'Money' Mayweather that; you'd imagine his tooth fairy would have been very generous.