In this week's Fight Talk we look at whether Anthony Joshua and Tyson Fury could bypass their next fights and take on each other instead; ask if Fury will return to the scripted world of wrestling entertainment; discover who won as Mike Tyson took on Muhammad Ali in a computer-simulated bout; and discuss whether Amir Khan should retire from the sport.

Could Joshua v Fury be next?

Are you missing boxing yet?

Well, this might give you something to look forward to.

Promoter Eddie Hearn says he will not rule out the possibility of an undisputed heavyweight blockbuster fight between Tyson Fury and Anthony Joshua happening next.

Matchroom Boxing’s Hearn, who promotes WBA, WBO and IBF champion Joshua, told Sky Sports that “you might find people jumping into bigger fights sooner” once the sport returns from the coronavirus outbreak.

But before you get too excited, he added that both fighters do already have contracts in place for their next scheduled bouts and it would depend on whether their opponents were willing to take a fee to step aside.

American Deontay Wilder, who lost his WBC belt to Fury in February, was set to fight the rematch in July, which could now happen in October.

Joshua was due to take on his IBF mandatory Kubrat Pulev in June, although that fight has now been postponed with a new date yet to be confirmed.

Hearn thinks it would be an easier task in getting Pulev to step aside, as the Bulgarian and Fury are both promoted by American Bob Arum.

But getting Deontay Wilder to agree to let the two Brits fight for all the belts will be far from straightforward. And Arum has said that although "anything is possible," both Pulev and Wilder have rights.

"No promoter like me, Eddie Hearn or Frank Warren is going to violate a contract," the 88-year-old added.

Boxing fans, all too familiar with the politics of the fight game, are far from hopeful of Joshua v Fury happening next…

And Wilder’s former promoter had this to say…

Fury, meanwhile, has been called out by a different champion this past week.

Scotsman Drew McIntyre won the heavyweight title in the scripted world of wrestling entertainment at the weekend after he defeated former UFC heavyweight champion Brock Lesnar at Wrestlemania.

So did Fury, who had a little stint in the WWE back in October, respond to the challenge?

Of course he did…

Joshua’s message to the public

Both Fury and Joshua have been vocal in thanking the NHS for the efforts during the lockdown, and have been encouraging fans to stay at home.

Last week the ‘Gyspy King’ told the British public to follow the government’s advice, and this week Joshua had a similar message for his followers…

The coronavirus lockdown has given us time to take a moment and appreciate some of the boxing greats from years gone by.

And the World Boxing Super Series (WBBS) have been keeping us entertained by replicating their eight-man tournament with some heavyweight legends.

Fighters from different eras went head-to-head in the ring, the bouts simulated through the EA Fight Night Champion computer game.

But not many could argue with the two finalist:; Mike Tyson and Muhammad Ali.

Tyson climbed off the canvas in the first round and then dropped Ali twice on his way to a unanimous victory.

So what did boxing fans make of it all? It may have just been a game, but they were getting pretty emotional about the result… 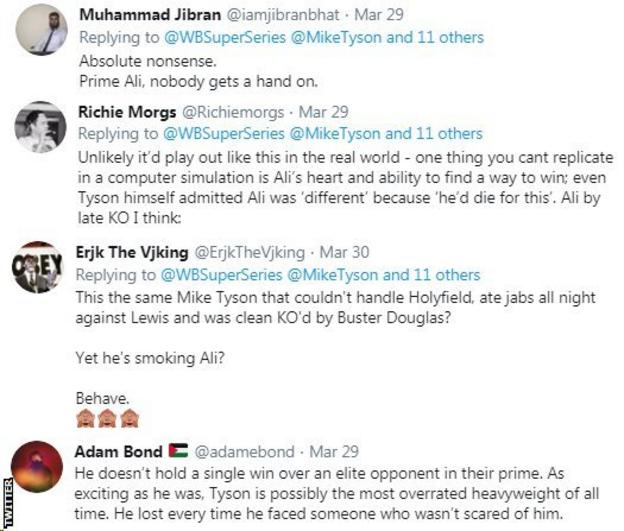 On Friday morning, Britain’s two-time world champion Amir Khan reportedly told The Mirror that he was considering quitting the sport at the age of 33.

But just a few hours later, he told BBC Sport that he does not intend to retire and has one or two more fights left, with his eyes set on a big-money bout against Filipino great Manny Pacquiao.

It was a remarkably quick U-turn. 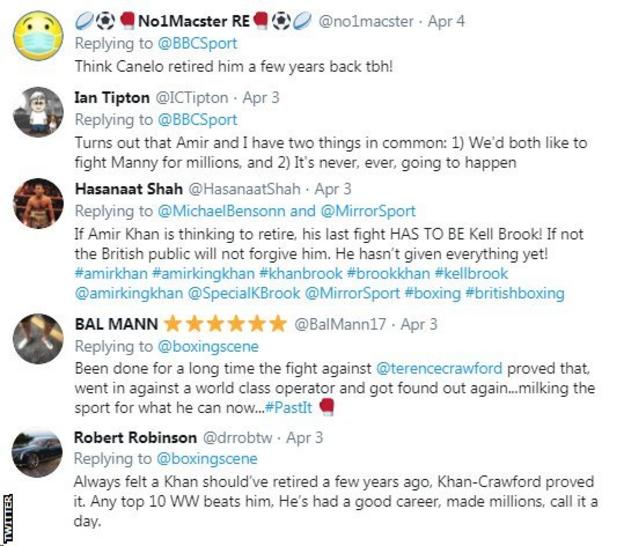