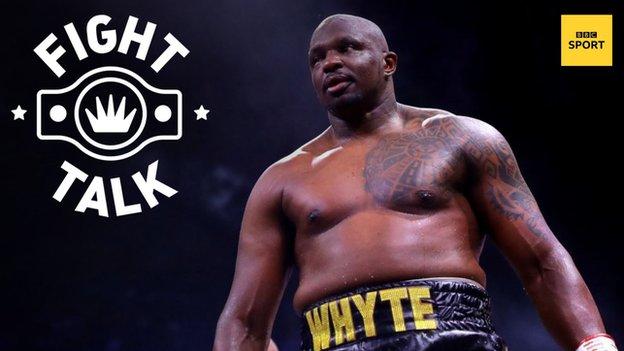 In this week's Fight Talk we look at boxer Dillian Whyte's comments that he would welcome a switch to mixed martial arts and the UFC, news that Kell Brook could take on world champion Terence Crawford and find out how boxers and promoters have been doing their bit to tackle coronavirus.

The build-up, the trash talking, fights that split opinion, Neil Diamond's Sweet Caroline being belted out in a packed arena, that first bell … oh how we already miss big-time boxing.

But amid the uncertainty of when we will next experience the thrill of a world championship fight night, the sport is full of huge personalities, which still gives us plenty to talk about.

British heavyweight Dillian Whyte's bout against Russian Alexander Povetkin, scheduled for 2 May in London, has now been rescheduled for 4 July.

But Whyte suggested this week that he could be tempted into the world of mixed martial arts, telling UFC president Dana White to "hit me up" and then even called out a couple of UFC heavyweights.

He mentioned Croatia's two-time UFC world champion Stipe Miocic, saying: "He'll just try to take me down but he might go to sleep before I go down though."

The Londoner then told his YouTube channel that he'd "knock out" Francis Ngannou, labelling the Cameroonian a "coward".

Fight fans are often protective of their sport and are quick to quash the idea of a boxer or mixed martial arts fighter swapping disciplines.

But Whyte switching from the ring to the Octagon may not be as far-fetched as you think; he's a two-time British kickboxing champion so would bring more to the table than just his fists. 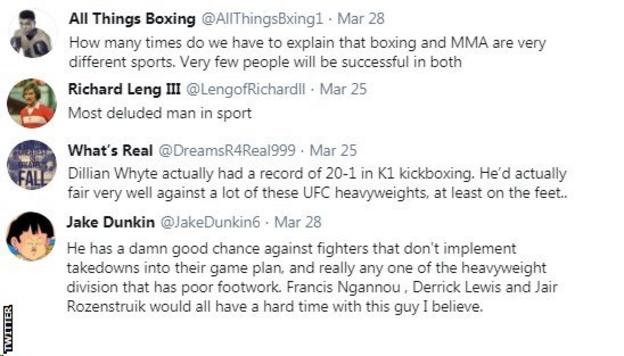 Kell Brook next for Terence Crawford?

One potential fight to look forward to post-coronavirus could be a clash between Sheffield's Kell Brook and American world champion Terence Crawford.

Promoter Bob Arum, still going strong aged 88, told Ring Magazine that "Brook will come to the fore" as the next challenger for Crawford.

The WBO welterweight champion is unbeaten in 36 fights and widely regarded as one of the best pound-for-pound fighters on the planet.

Meanwhile, Brook, a former IBF welterweight champion, has seen his career stall in recent years. He suffered back-to-back defeats by Gennady Golovkin in 2016 and Errol Spence Jr in 2017.

He then also had a 14-month spell out of the ring between 2018 and 2020, before showing glimpses of his old self in a win over American Mark DeLuca in February.

Brook would go in as a heavy underdog against Crawford but says he is ready for the opportunity...

Crawford already has wins over Britons Ricky Burns and Amir Khan, and boxing fans can only really see the same outcome… 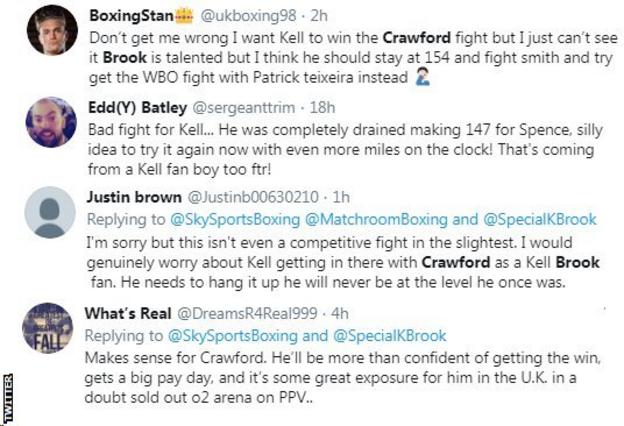 The boxing world has come together to offer their support to all those affected by the pandemic and show appreciation to those helping the fight against it.

Here are just some examples of the gestures and kind words offered by fighters and promoters.

Fighters' tips on exercising at home

Loads of us will be missing the gym and trying to think of new ways of staying fit.

Well, fighters have been using their social media channels to share tips and videos on how you can exercise at home during the lockdown.

And for something a little bit more fun, here's Ukrainian Oleksandr Usyk showing us how he is keeping his hand-eye coordination as sharp as ever…