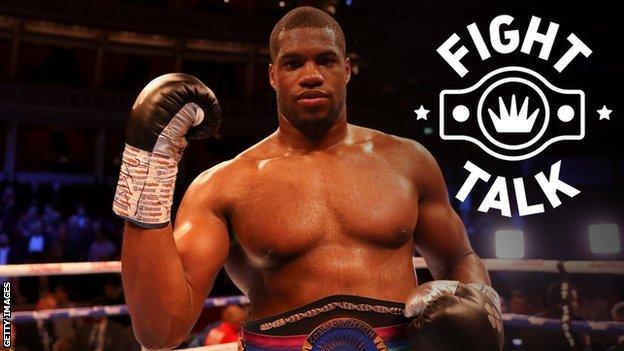 If you are viewing this page on the BBC News app please go here to see this story in full.

Here's our round-up of this week's boxing and mixed martial arts chat from across social media.

Will Dubois be world champion in 2020?

The British heavyweight scene is booming.

On 7 December Anthony Joshua has a rematch against Andy Ruiz Jr for the WBA, IBF and WBO world titles, while Tyson Fury looks set for a rematch of his own with WBC champion Deontay Wilder in February, should the American beat Luis Ortiz on Saturday.

Throw in the likes of Dillian Whyte, Dereck Chisora and Joe Joyce, and the Britons are dominating the heavyweight rankings.

But there's one name that has every British boxing fan excited - 'Dynamite' Daniel Dubois.

The undefeated Londoner, 22, has stopped 12 of his 13 opponents so far and will next face Kyotaro Fujimoto on 21 December at the Copper Box Arena in London.

The heavyweight is already receiving high praise from the elite fighters. Wilder singled him out as the one to watch, telling FightHype: "I like this kid Daniel Dubois a lot. I like his dedication to the sport, his discipline and his eagerness and willingness to learn."

And Fury, who has sparred with Dubois, told Talksport this week that he will definitely be future world champion.

But is it realistic to think Dubois will hold a world title by next year? Some think so…

However, other fans say he should not be rushed and needs to improve the quality of opposition…

Before his fight against Dubois, Japan's Fujimoto, who has lost once in 22 fights, held a somewhat strange news conference last week.

Sitting to his left, was his promoter.

And to his right? Well, it was an adult dressed up as a panda. 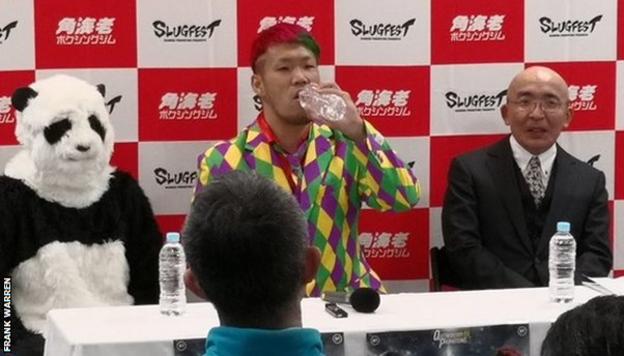 "My opponent is a giant of a man. He seems big and strong as a bear. It's a little scary to fight a bear, so I've brought in a panda as a sparring partner," Fujimoto tried to explain.

And Dubois also had his say…

Would Froch have beaten Canelo and Golovkin?

We could spend hours discussing fantasy fights between boxers of different eras.

How would Muhammad Ali fare against Mike Tyson in his prime?

Could Floyd Mayweather showcase his slick skills against the great Sugar Ray Robinson?

Well, Carl Froch - someone who often causes a stir with comments - has had his say on how he'd beat Saul 'Canelo' Alvarez and Gennady Golovkin.

The former super-middleweight world champion told his Fighting With Froch podcast that he'd use his "jabs and combinations" to "hammer" Canelo for 12 rounds and he'd simply "be too much" for Golovkin.

Some fans on social media took the debate seriously and shared their thoughts on the match-ups... 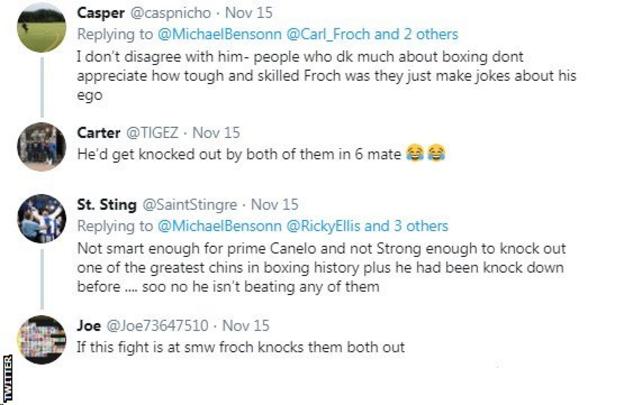 Others, though, thought this was Froch, well, just being Froch... 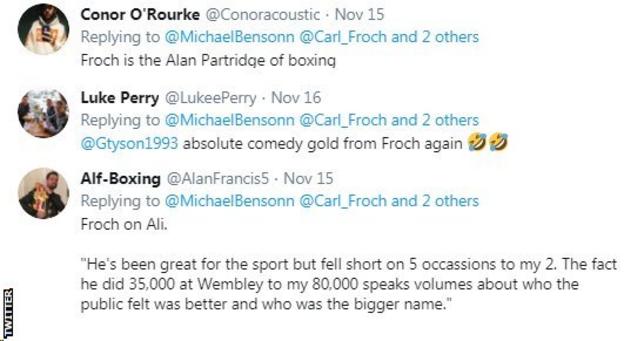 It wouldn't be Fight Talk without a section on Fury's antics from the week.

The 'Gypsy King' will be hitting the charts this Friday with the release of Bad Sharon, a collaboration with singer Robbie Williams.

A preview of the tune has already been released, so what do people make of it? 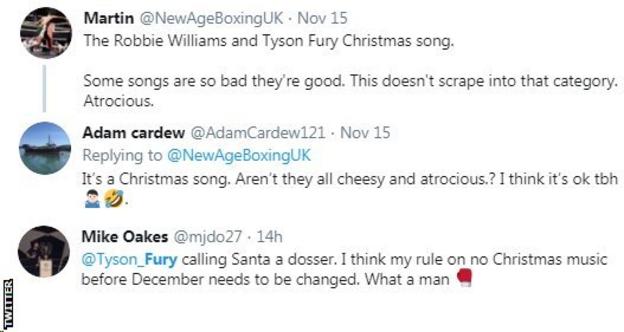 It feels like we've been waiting forever, but Conor McGregor looks set to return to the Octagon in January against Donald Cerrone.

Although nothing official has been signed yet, the Irishman - who has not fought since his loss to Khabib Nurmagomedov in October 2018 - is already in training.

His coach, Owen Roddy, told MMAJunkie that McGregor is "training hard" and looking "in phenomenal shape".

Meanwhile, McGregor has been introducing his son, two-year-old Conor Jr, to the world of mixed martial arts, sharing this clip of the two on Instagram…