Heavyweight boxing is braced for its biggest few weeks in over a decade.

I think Anthony Joshua will use fear to reign once again and Deontay Wilder will also be victorious in his fight against Luis Ortiz. If Wilder wins it would seem to set up a much-anticipated Tyson Fury rematch but I don't think that's a fight that's going to happen.

The heavyweight scene is simply buzzing and I urge the country to back Joshua. I know this business well enough to say that the profile of boxing on these shores will suffer if he loses and other British fighters will feel it.

Andy Ruiz Jr stunned us all by taking Joshua's three world titles in June but I truly believe he was 15 seconds from being beaten. If he wins their rematch on 7 December, expect him to become a target for WBC champion Wilder.

Wilder fights Ortiz this weekend and his style guarantees excitement but I think he wants nothing to do with a proposed rematch with Fury on 22 February.

I, like many, believe Fury beat him last December. Wilder has already said he would see how Ruiz-Joshua II goes and why would you wait to see that if you are scheduled for Fury in February?

I once arranged to meet Fury at Haydock races before he came back to the sport. I like the guy and we agreed a fight in principle but that was based on him facing me without any kind of warm-up contest. That was the whole point from my side and he went along with it, though my promoter told me I wasn't doing it.

The point is, I knew Fury would improve with activity. He is better now than he was a year ago and I would therefore be amazed if Wilder goes anywhere near him.

Fear and a touch of chess will aid AJ 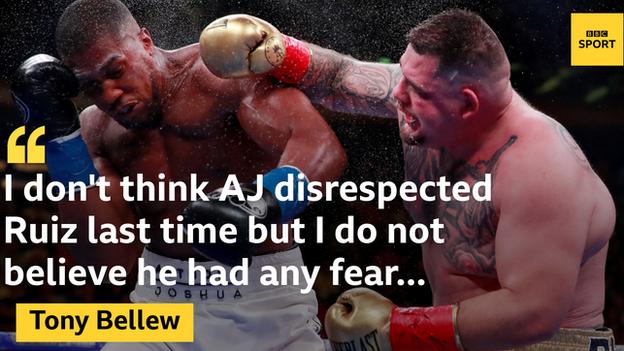 These are the kind of boxing spells where the fact I have retired can hit home. When I first bowed out after defeat by Oleksandr Usyk I wouldn't say I was struggling, and I don't want to use the word depressed, but it was tough. I'm in a better place now and we have another baby on the way, so I'll be busy for sure.

Part of my timetable takes me to Saudi Arabia to watch Joshua and I have been in contact with him a bit for this training camp. He is happy and content.

I was trying to gauge how he may feel after a first loss. My first defeat against Nathan Cleverly did not hurt me as much as you may think because I believed I had won. The second loss though to Adonis Stevenson, that was crushing, heartbreaking and just downright hard. I felt I was a failure, like I did not belong at the top level.

Will this be how hard Joshua has taken it? I am not so sure as people forget he had so much success against Ruiz. This fight, ultimately, will be what defines him as a man. True champions step forward again and I really do think that is what he will do.

He was 15 seconds away from winning the first fight. He dropped Ruiz for the first time in his career and tried to jump on him for a finish, only to get clipped to the point where his legs betrayed him. That can happen to any fighter.

I think he showed immense heart to carry on when his legs weren't with him. Essentially, he went four rounds on instinct and bottle, and yet some people said he quit, which absolutely disgusted me.

I have come out of the ring and not known where I have been two hours later. After one fight I flipped out in the dressing room and insulted one of my closest friends. I was, like Joshua, suffering the effects of being hit heavily.

As he gets ready to face Ruiz again, we have to remember that with AJ, you are not getting Lennox Lewis. The man is not a chess fighter, he is explosive and possesses immense speed for a big man. The downside is he wants to fight up close and chase a knockout. That is his personality and in this game, it is hard to extract that from a fighter without taking something away.

If his team can add a touch of Lewis to Joshua's game you would get nearer that hallowed 'finished article' all boxers dream of being but few ever become.

Critically, I don't think he showed disrespect to Ruiz last time but I do not believe he had any fear.

That fear factor can make the difference and will here. I recall facing Ovill McKenzie in 2010 for the Commonwealth title and thinking 'this guy cannot hurt me'. I got in the ring, got clipped, went down, got up, clipped again and ended up face down on the canvas. I won and come the rematch, I knew what he could do and dominated him.

Joshua has the fear factor needed to stay sharp now. It will be key and he will win, which means the fighters who sit on his fight cards, British boxing and all the parties connected to him will continue to thrive.

Wanchope, Wilder and the dream scenario 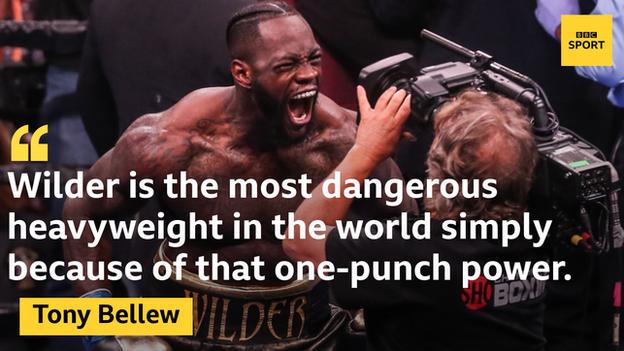 Wilder is brilliant, box office and confusing all in one package.

He reminds me of former Premier League player Paulo Wanchope, who seemed to have arms and legs flying at all angles yet excited people and was a threat.

Why it is so confusing is if I was taking a kid to the gym to teach him how to box, I would start with the fundamentals of transferring your weight from your back foot, up, through your body and out to your connecting fist.

Wilder, by comparison, is in the air, feet off the floor, hits someone with a punch from a crazy angle and they are out. I simply cannot explain that and boxing is the only thing in the world I truly understand.

What I will say is his style guarantees excitement and while Joshua, Fury and Ruiz can all make claims on who is best, Wilder is the most dangerous heavyweight in the world simply because of that one-punch power.

Ortiz is the hardest fight he could have chosen outside of the truly elite names. The man is a Cuban and if you show me a bad Cuban boxer I will show you why you're wrong.

But Ortiz is clocking on the years at 40. Wilder will just have too much for him and the question is where that then takes us?

The ultimate scenario is that Wilder does get beaten by Fury in February and Joshua beats Ruiz for the other three belts. Then next year we could have an all-British affair at Wembley Stadium for all of the prizes.

It feels like a dream right now but as the last 12 months have shown - from Fury climbing from the canvas against Wilder, to Joshua's shock defeat and then a WWE stint for the Gypsy King - rule nothing out right now.

The coming weeks will be riveting.