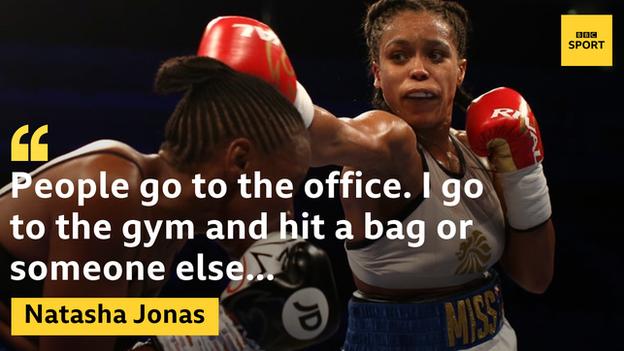 Natasha Jonas is the fighting mum, with a World Cup football-playing sister and world-title aspirations undimmed by recent setbacks.

At 35 the Liverpudlian is still making tweaks to her training, has overcome the "emotional" stress of a first defeat last year and wants that title tilt soon.

Meanwhile, passionate in her backing of women's sport, she calls on governing bodies to pounce on "eureka moments".

As Jonas prepares to face Bec Connolly in Liverpool on Friday, she sat down with BBC Sport to talk school runs, bouncing back and the health of women's sport.

In becoming the first British woman ever to box at an Olympic Games in 2012, Jonas' profile grew - but her move into the professional ranks took a further five years, with daughter Mela coming along in 2015.

Life in the paid ranks has seen her persistently linked with a shot at Ireland's Katie Taylor - who eliminated her from the London Games - but a defeat by Brazilian Viviane Obenauf in August halted her progress towards a bout with the unified world lightweight champion.

"It wasn't the loss itself that hurt, it was the manner of the defeat," said Jonas, who outpointed Tanzania's Feriche Mashauri in March. "I'd never been stopped before in amateur or professional, so it hurt.

"The first time you lose it's a very emotional thing. Its your pride, your ego, everything.

"People are on a journey with you and not everybody is a boxer, so they judge off results. When you're winning they think you always will. They follow your career and don't expect you ever to lose.

"No-one ever wants to lose, so once you have that undefeated record it does become a burden. It becomes an added pressure as you don't want to lose it. You want to be a Floyd Mayweather or a Joe Calzaghe - but when it does go it's also a relief as it's happened; the pressure is off so crack on."

Jonas insists she learned more from defeat than she had during any point in her career, prompting changes in her training.

She believes her return to winning ways in March has provided a momentum and hopes the chance to fight for a world title will come at the "end of the year or the start of next year".

Daughter Mela would no doubt be impressed with such an accomplishment.

"She can't go past a swing in a soft play area without throwing punches and saying 'look mummy, look'," adds Jonas.

"She loves watching the shows, anything where someone is on TV who she knows.

"Everyone asks if I will push her into boxing. I'll do what my mum did and encourage her to be active.

"It's tough but I think being a working mum everyone finds it tough - it's just my job is a bit different. You're still doing the school runs and being a mum. People go to the office, I go to the the gym and hit a bag or someone else."

Jonas' boxing career was preceded by 18 months at St Peter's College in the United States on a football scholarship.

Her sister is Lyon forward Nikita Parris, who recently starred for the England's women on their run to the World Cup semi-finals.

Having witnessed the boom in women's boxing and the growth of her sister's profession, Jonas is hopeful about the future of women's sport.

"We still have a long way to go before it is equal but we are progressing in the right direction and it's making it easier for young people coming through," she said.

"It's important that those coming in while it's on a rise don't go through the same struggles we did.

"I think every sport has a 'eureka' moment. For boxing it was London 2012 Olympics as people saw women performing at the elite level. That changed a lot of minds and opened the eyes of young females. I think there was a 57% increase in females who wanted to box.

"When you have that eureka moment it's up to associations to keep that ball rolling, with sponsors, TV companies on side.

"You have to keep it growing."