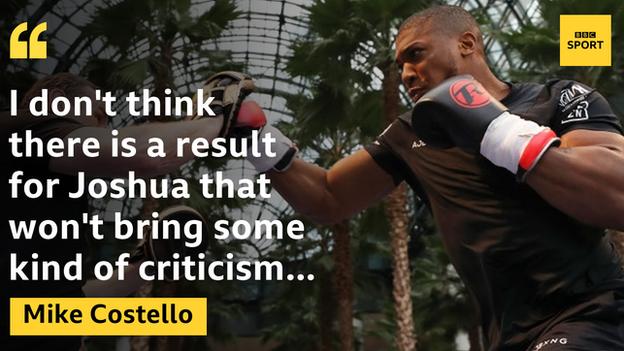 In New York on Saturday night Anthony Joshua has the glorious prospect of a victorious US debut, and yet in many ways a thankless task in view.

The WBA, WBO and IBF heavyweight champion of the world gets to shine under the lights of the famous Madison Square Garden against Andy Ruiz Jr but pretty much every outcome is likely to draw critics.

Ruiz, a late stand-in following Jarrell Miller's failed drugs tests, has proved refreshing and eye-catching in fight week but the 29-year-old is no Deontay Wilder, the WBC champion, and nor is he former world champion Tyson Fury.

"I don't think there is a result for Joshua that won't bring some kind of criticism," says Mike Costello, who will commentate for BBC Radio 5 Live from ringside.

"If he blows Ruiz away in a round, everyone says he is an unworthy opponent. If he takes 12 rounds, people will talk about decline.

"I think this is about Joshua appeasing himself and his team. They have to exist in a tunnel around this fight."

Joshua says he hopes to face Fury next but such a bout is unlikely to take place for 12 months. For now, perhaps becoming the first man to stop Ruiz inside the distance will be enough to win praise. 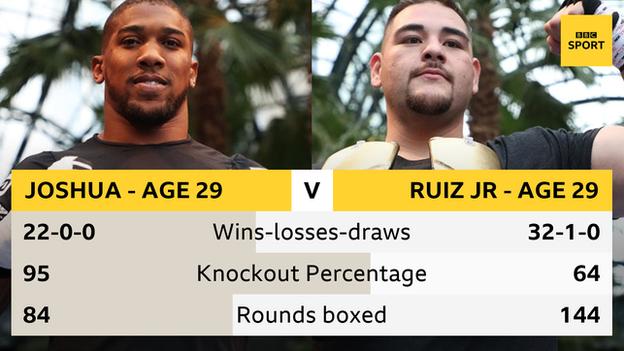 In truth, Joshua's impact on America has so far felt relatively low-key. British fans formed the brunt of around 4,000 present at Friday's weigh in where in a lively atmosphere, the champion scaled 247.8lbs and Ruiz 268lbs.

Respected boxing author Thomas Hauser told BBC Sport this week that Joshua could walk down a New York street without being recognised and cited the "mess" that is the heavyweight division as a major issue when trying to suck new fans into boxing or raise your profile in America.

But even to box here is a landmark in Joshua's already remarkable career and he is clearly taking the engagement seriously.

The Briton has been training in Miami to prepare in the same time zone as New York, has worked with a new psychologist leading up to the contest and has even teamed up with Navy Seals - apparently to bolster his skills in 'crisis management'.

"They've been talking to him about their experiences and how they respond to getting shot, and how they control the aftermath," explains Costello.

"How could he translate that to dealing with a knockdown? It reminds me of how trainer Adam Booth would work on the same thing by getting David Haye to tumble around the canvas and then get up and try and fight when he was so dizzy."

Mexican style or a power show?

Former unified cruiserweight champion Oleksandr Usyk of Ukraine will be ringside on Saturday, which may increase speculation that he could be Joshua's opponent later this year, if the Briton justifies odds of 1-25 by beating Ruiz.

But Ruiz, born in the US to Mexican parents, seems to care little for his underdog status and has walked around media events at ease all week, stressing he will become Mexico's first world heavyweight champion.

At 6ft 2in, he is four inches shorter than Joshua and he has taken to studying Mike Tyson, a man who destroyed countless taller opponents and is one of Joshua's heroes.

He has vowed to bring the renowned 'Mexican style', where fighters pressure opponents and often take shots in order to land work of their own.

If he can execute the strategy, he could negate Joshua's natural reach advantage but it remains to be seen if he will be as keen to force himself forward if the champion lands something heavy early on.

Were Ruiz to win, he could stand alongside the likes of James 'Buster' Douglas - who conquered Tyson - and Hasim Rahman - who humbled Lewis - as a fighter to send a shockwave through boxing. 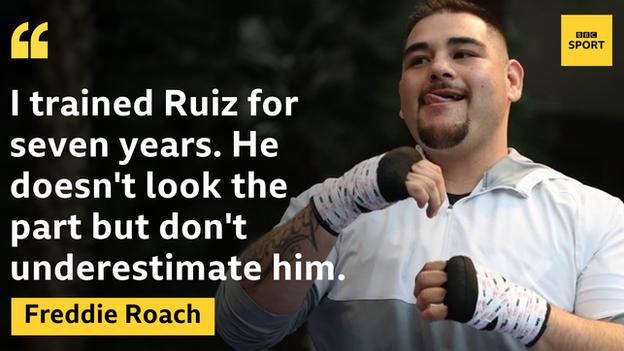 'An early night' - what they said

Ruiz: "The movement the speed, the pressure, all that will come together. He has never fought someone who pressures him. I don't know how he fights going backwards but we have to stick to the plan."

Joshua: "Getting used to the time zone was most important and I feel fresh. No challenge is easy, no matter what the odds say. Andy is going to come in here and give me a real good fight and cause problems."

Costello: "Were Joshua to lose, it wouldn't be a career-ending defeat but a career-changing one, as it would impact his power at the negotiating table."

Bunce: "It will be a better and harder fight than people imagine. It may only last two or three rounds but it will be hard until that point."

Hall of Fame trainer Freddie Roach: "I trained Ruiz for seven years. He doesn't look the part but don't underestimate him as he can punch, has good hands and is fast. If you take him lightly he will upset you."

Former two-weight world champion Carl Frampton: "Ruiz is probably better than people give him credit for. Looking at the size difference though, I think when Joshua lands it could be over. It could be an early night."

BBC Radio 5 Live will run commentary from Madison Square Garden from 01:30 BST as two other world-title contests feature on a packed undercard.

Ireland's Katie Taylor will attempt to win the only women's lightweight belt she does not already own from Belgian policewoman Delfine Persoon.

If the 32-year-old becomes undisputed champion Costello believes the bout "could be the women's super fight that the sport needs".

Bunce added: "Women's boxing needs a hard contest. I have seen enough of Persoon and I think she brings an awful lot of problems. If Taylor dominates this and wins all the rounds, I will be gobsmacked."

And Liverpool's Callum Smith will defend his WBA world super-middleweight title for the first time against French-Cameroonian Hassan N'Dam, a bout which could pave the way for a contest with boxing's best-paid fighter Saul 'Canelo' Alvarez.