Unified world heavyweight champion Anthony Joshua says he will only feel he has "made it" in boxing if he captures Deontay Wilder's WBC title.

The 29-year-old faces Andy Ruiz Jr on Saturday and told BBC Sport he does not feel "burnt out" as a fight week begins for the first time in a decade.

"I've never been in a fight week where I have felt so energised," he said.

Meanwhile Ruiz has revealed he got the New York fight by "bugging" Joshua's promoter Eddie Hearn on Instagram.

Billboards and one more belt

Joshua, the WBA, IBF and WBO champion, cut a relaxed figure as he spoke on a New York rooftop, his hands sporting plasters and his cheeks showing small blemishes likely picked up in sparring at the Miami training base he has used to prepare for his US debut.

Saturday's fight at Madison Square Garden will see him end nine months of inactivity, during which talks with Wilder have yielded nothing in the shape of a historic contest where one man could win all four heavyweight world titles for the first time.

Asked if the glamour of New York and billboards sporting his name mean he has made it, Joshua replied: "Yeah, it looks like I've made it but it's only when I put my hand on the last title - and win on Saturday - then I can say I've made it.

"It's been down to calculated steps. It's been a good journey, a tough journey. On the sides of the journey there are billboards, then with time, two billboards but it's all about winning in this sport.

AJ's breakthrough and point to prove

Wilder - who is expected to face Luis Ortiz in his next bout - will not be at 'The Garden' on Saturday but his manager Shelly Finkel will.

There appears little chance of a contest with Joshua in the coming 12 months, meaning both men risk losing their huge payday and unification bout with a defeat before then.

But Joshua, who stopped the respected Alexander Povetkin last time out, has previously warned delays will only make him better and feels the preparations for this fight are his best ever, having refined methods after almost 11 years in the sport.

"I've had 10 years of that feeling of being burnt out by the time I get to the ring," the 2012 Olympic champion said.

"Even in the Povetkin fight I was so ill and tired. This camp, I knew I couldn't afford that again and again as it shortens the career. So it's learning but it's taken time. We are finally pulling it together.

"It's time to rebuild that name again. I feel like an underdog and like I want to prove myself."

Ruiz gets an Insta scrap 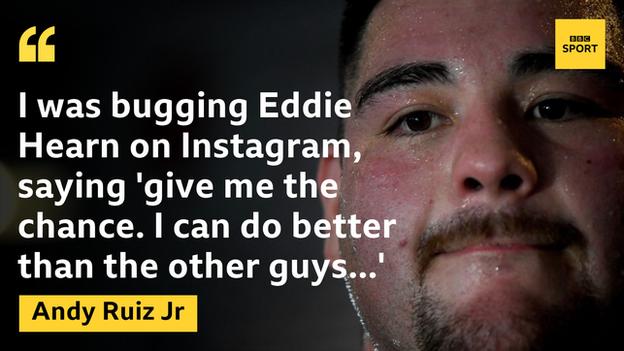 Ruiz, born in California of Mexican heritage, will give away around four inches in height and substantial reach to Joshua.

But the 29-year-old, who lost a world-title shot against Joseph Parker in 2016, appeared entirely at ease before countless media in New York and said he pounced on the chance to face Joshua when American Jarrell Miller failed drugs tests to lose his chance at the titles.

"I was bugging Eddie Hearn on Instagram, saying 'give me the chance, I can do better than the other guys lined up'," said Ruiz, who has one defeat in 33 fights.

"He messaged me back and I was telling my partner 'hey babe he messaged back'. And what do you know, we got the fight on."

Part of the fight week narrative is expected to focus on the physique of Ruiz, who weighed 262lbs in his last contest, meaning he will likely be the heaviest opponent Joshua has faced.

The pair will both workout before the public in Manhattan on Tuesday, offering media a glimpse of Ruiz's condition.

"I feel amazing, my conditioning is good," he added. "Miller gave me the opportunity but I'm here now to make history.

"This is for my Mexican people and kids. I wake up, run, train, all the sweat is for my kids' futures and it's for Mexico, to be the country's first heavyweight champion of the world."

'Fearless Ruiz will go all in' - analysis

BBC Sport boxing correspondent Mike Costello: "I thought Anthony Joshua tonight looked like a man made for these occasions. I thought he looked absolutely spot on.

"Ruiz will be giving away a lot in height and reach and we could sense that stood next to him. It's an upward curve but you do get the sense from him he will give it a right go." 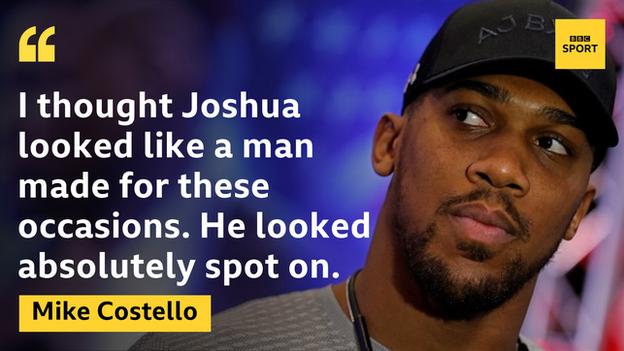 BBC Radio 5 Live analyst Steve Bunce: "Ruiz is fearless, he's stepped up. He didn't quibble about money. He has absolutely no physical edges whatsoever but he's used to that against big heavyweights. Rest assured, Andy Ruiz will deliver heart and guts."