The blow landed with a sickening thud on the side of Josh Taylor's face, his jaw smashed in 13 places, his features so bloodied and swollen that only plastic surgery could put him back together again.

Amid the shouting and screaming and bleeding, he caught sight of himself in a mirror. The Elephant Man of Prestonpans. In his own words, he took "a freakie". In the aftermath he lived off nothing but chicken soup and cheesy Wotsits for weeks. He can't look at a Wotsit nowadays. Now that he thinks about it, he's not all that keen on chicken soup either.

This horror story has not been plucked from the boxing ring, it's not a gruesome tale of an encounter with some bruiser from Taylor's 150-odd fights as an amateur or from his 14 undefeated as a pro. It goes back to a time well before people started looking on him as a potential champion, a dream that could come true at the Hydro on Saturday when Taylor fights the 26-year-old Belarusian, Ivan 'The Beast' Baranchyk, for the IBF super lightweight championship of the world.

"I was about nine," he says. "I was playing golf with my wee cousin, teaching her how to swing the club. I was quite a good golfer when I was younger. My granddad was a member at Royal Musselburgh and he used take me there all the time.

"My cousin must have thought I was away and next thing... boof! She swung and smashed me right in the face by accident. Properly skelped me. Straight home, straight to the doctor, into the ambulance, straight on the gas and into the operating theatre. The doctor said that I was only a couple of centimetres away from maybe getting paralysed, or worse. I haven't played golf since. Boxing's OK, but golf's too dangerous."

He laughs and tells another yarn to back up his point that however brutal the ring might appear to those of us on the outside, it's the safest place for him, his home from home.

From an early age, motorbikes were part of Taylor's life. That was his dad's game. Couldn't get enough of it. An adrenaline rush like no other. "Some of my earliest memories are to do with bikes," he says. "I had a motorbike from the age of five. I loved everything about them.

"When I was about 13 I got spat off a bike at 60mph and landed on a rock. Bruised lungs, bruised kidneys, coughing and peeing blood for days, couldn't breathe properly. I was tiny but I was good. I was getting top-threes in fields of 40 against kids with two bikes and money thrown at them. I did a full season, but it's expensive. We couldn't keep going. Just couldn't afford it."

'My opportunity is here now'

Those days are still vivid in his mind's eye but in reality they're a world away from what's expected to go down at the Hydro on the night of 18 May. Baranchyk is the reigning champion, but Taylor is not just favourite but scorching hot favourite with the 24 bookmakers in this country currently doing business online.

Baranchyk has an unblemished record - 19 fights, 19 wins. He's strong and dangerous. In the parlance of the sport, Taylor is not going to have to go looking for him, but even taking all that into account, the odds layers can't see past the Scot. His speed, his timing, his movement, his footwork - most of boxing thinks a new champion is going to be crowned.

"I'm expecting him to come out all guns blazing," says Taylor. "I'm expecting him to push the action and stay on my chest, but I'm well prepared for that. If he tries to box, he's got no chance of out-boxing me. I'll outbox him every day of the week. I can beat him in every department. I've got a lot of respect for him because he comes to fight and he leaves it all in there, but I think I have the beating of him. 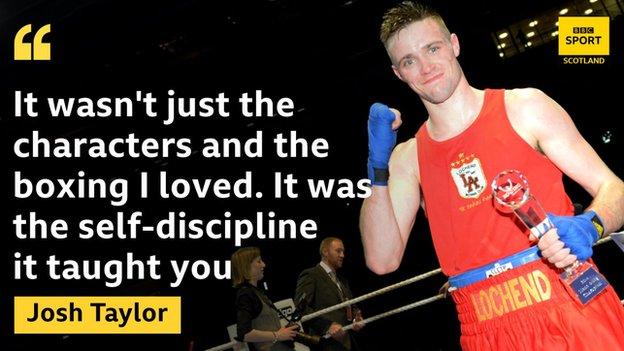 Terry is going to be with him as usual. Uncle Terry McCormack in his corner, just like he always is. It's not his actual uncle, of course, but he's like family none the less. A second father figure is how Taylor describes McCormack, the former binman who jacked in his job to set up Lochend Amateur Boxing Club, a place where Taylor fetched up as a young kid.

He says he had little man syndrome in the early years. It's not that he went looking for trouble, but trouble found him and a few boys with a shine for themselves were made to learn the truth of the maxim, the bigger they are, the harder they fall. "My temper would break easily... like a Kit Kat," he recalls.

Taylor talks about those formative years with a broad smile. He runs through the characters he encountered at Lochend and beyond. McCormack was the inspiration - training him, talking to him, teaching him about boxing and the world outside.

There was another guy, old George Baigrie, who just made life very simple for himself by calling everybody Boaby. There was Pat Toner from Fauldhouse who cut about with a wee hat and a neck chain and rings. "He was like that Mickey from Rocky," says Taylor. "He's dead now, Pat.

"There was Rab Bannon, Ricky Burns' coach. He's like wee Mickey an' all. There was guy called Tom Brown, the timekeeper who used to be manager of the Scottish team. You know that expression, 'Stick to him like glue'. Tom would say, 'Stick to him like Sellotape, son. Like Sellotape!' I loved the old-school boys. There were loads of them. They had all the best patter.

"It wasn't just the characters and the actual boxing that I loved, it was the self-discipline it taught you, it was the respect for others, it was about getting fit and strong and feeling good about myself and making friends. Boxing has taught me a lot in life."

There are things we see and things we don't see. We see Taylor putting on an exhibition and taking out the highly-regarded and undefeated American Ryan Martin in seven rounds in his last fight. We see him having to dig deep against Viktor Postol and boxing the ears off Winston Campos in three rounds, Warren Joubert in six and Miguel Vasquez in nine.

What we don't see is the brutality of the training and the turbulence of the rollercoaster.

"Usually on a Wednesday we do the circuit and I get real nervous before the circuit because it's hard," he says. "This curve machine here - gets the legs and the lungs going. Sometimes I come crying off that thing. Blood, sweat and tears.

"In boxing, there are so many ups and so many downs. When you're up, you're in the clouds, you're in heaven, and when you're down, you're down in hell, pissed off with everybody, lonely and thinking you're the only one going through it. You always have that monkey on your shoulder feeding you negative thoughts. 'What if this happens, what if that happens?' I try to take a baseball bat to it.

"I get a bit crabbit in the days leading up to a fight. I'm a bit of a nightmare to be around. I'm biting people's heads off for the slightest thing. You're trying to do the weight, you're dehydrated, you're excited, you're nervous. A lot of things go on in your head before a fight."

Taylor's class in the ring is obvious. He may not be a one-punch knockout artist, but opponents have spoken in the past about being taken by surprise at the power in his punches. They don't always take a guy out first pop, but when they come in clusters, in threes and fours and fives, they're hard to withstand.

Nobody has come with up an answer to him yet. Few think that Baranchyk, despite holding the belt, is going to be the man who quells the tornado.

"He's going to be leaving Glasgow without the belt and when I have it I'm just not going to take it off," he says. "I'm going to go to bed with it on. I'm going into the shower with it. Everywhere I go, it's coming. It's the dream. I've visualised getting my hand raised and the announcer going, 'The winner... and the new...' Those famous words, '...and the new...' I've visualised that millions of times over the years."

On that, and on many other counts, you don't doubt him, not for a second.