Kash Farooq successfully defended his British bantamweight title for the second time and was then challenged to an all-Scottish showdown by Commonwealth champion Lee McGregor.

Glasgow's Farooq stopped Kyle Williams in the fifth round on Thursday night.

"I'm willing to fight Kash in my next fight and that's the fight I want," McGregor wrote on social media.

"British and Commonwealth titles on the line, two young Scottish fighters in great form, it's a no-brainer. Over to you Kash," added McGregor, who took the Commonwealth title in October last year with a final-round stoppage of Cameroon's Thomas Essomba.

Farooq knocked down Williams, 27, in the second round at Glasgow's St Andrews Sporting Club and the English challenger could not continue after going down again.

The defending champion soaked up pressure in the third and stumbled just before seeing out victory in the fifth, extending his unbeaten record to 12 fights.

"I'm feeling really, really happy," Farooq told BBC Scotland. "I was expecting to go 12 rounds but I took my opportunity and it was game over."

Williams - who suffered the first loss of his 11-fight career - said: "I said before that whoever won that fight would go on to the next level and I think he just proved that he's ready for that next level."

Every time I see Kash Farooq, there's something new, he's adding something new to his game. It just looked fantastic. His balance was tremendous, his punch picking was great.

He's added in some really nice defensive skills that I think are going to help him a great deal moving on from the British title. This isn't this guy's limit. This guy is world champion material. He's getting better all the time. He's becoming a force to be reckoned with. 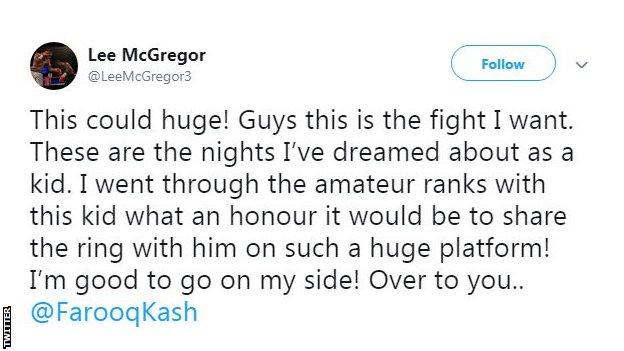 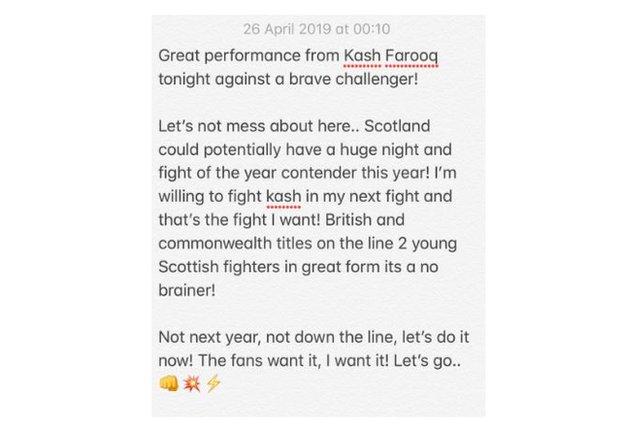