Unified world cruiserweight champion Oleksandr Usyk will get a "rude awakening" if he is already thinking of a fight with heavyweight champion Anthony Joshua, says Tony Bellew.

Bellew, 35, takes on the Ukrainian - who holds the IBF, WBA, WBO and WBC cruiserweight titles - on Saturday.

Usyk, 31, is likely to move up to heavyweight after the bout.

"He's another fighter who wants to get through me to the king - AJ. He is another who will fail," said Bellew.

"He is underestimating me and already asking promoters which heavyweight will he face after this. He is in for a rude awakening. When I hit him for the first time he will feel it." 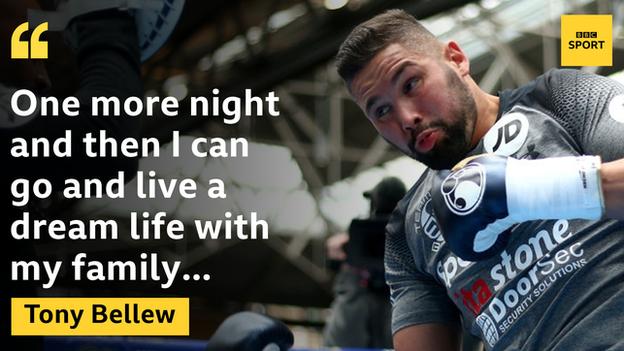 Bellew enters what is expected to be his final bout following back-to-back wins against David Haye - another fighter who had been eyeing heavyweight title shots before finally retiring for good earlier this year.

The Liverpudlian told BBC Radio 5 live's boxing podcast he had "retired" from the sport until Usyk called him out immediately after winning the World Boxing Super Series to seal all four cruiserweight belts.

"It is a dream. My life achievement would have been to get near these belts and I am gong to win all four of them," added Bellew.

"Retired or not, it had to happen. I am going to find a way."

The Briton will start as underdog at Manchester Arena against a fighter who has won all 15 of his professional bouts.

Usyk wanted to make the fight at heavyweight, the weight at which he won Olympic gold in London in 2012, but Bellew insisted his motivation was to hold all four titles, something no British fighter has done in a weight division.

Bellew, who has shed around 34lbs in dropping down to cruiserweight, has repeatedly said on social media that this will be his "last" training camp, and seems almost certain to retire in the weeks after the contest.

"I understand why people write me off as he looks so formidable," he said. "I have no doubt in my mind that I am going to find a way through him and shock the world again. Against the odds, I just know I can do it.

"He makes mistakes, as we all do. We all have vulnerabilities. I have seen the speed and come across the awkwardness he brings. I have experienced all the things but he has ever experienced what I am capable of doing.

"When I do it, I can say I have won everything. One more night to survive through and then I go on to live the dream life with my family."