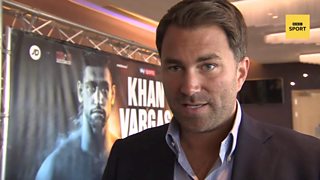 Anthony Joshua's promoter Eddie Hearn says Deontay Wilder has been offered a contract for a fight at Wembley on 13 April and all he needs to do now is sign it.

Britain's Joshua has been ordered by the WBA to fight Russia's Alexander Povetkin, delaying a potential unification bout with American Wilder.