Boxing trainer Brendan Ingle has been described as "the best in the world" after his death at the age of 77.

"A good, good man has left this earth today," Nelson wrote on Instagram. "A good friend. A good father figure. And the best trainer in the world."

"Brendan Ingle changed the shape and face of British boxing," he said. "The boxing man is dead. Everybody else in the business was in a line behind him - the place will not be the same."

Ingle was made an MBE in 1998 for his services and contributions to British boxing and his work with young people in the Sheffield area.

Having moved to South Yorkshire from Ireland aged 18, he fought as a professional middleweight in his mid-20s, and at his pinnacle was ranked as the number eight fighter in the UK.

While living in Wincobank, Ingle was asked by the local vicar to carry out some community work because youths in the area were "running wild".

He organised a weekly dance at St Thomas' church hall - which led to the creation of his famous gym.

"All the nutcases were coming in," he said in 1999. "After the Sunday dance people would turn out on to the street and start fighting down Newman Road.

"So after 11pm we'd lock the doors, I'd fetch the gloves out, which thinking about it now was crazy. I would referee. Nobody ever got hurt."

Ingle then became a trainer and contributed to the success of former featherweight world champion Hamed and cruiserweight Nelson along with former WBC light-welterweight champion Witter.

His sons, Dominic and John, took over the gym when Ingle stood down and continue to train world champions Kell Brook and Billy Joe Saunders.

'Ingle treated everyone the same'

For more than 50 years, Ingle ran his gym from at St Thomas's church hall in the Wincobank area in Sheffield. From there, Hamed, Nelson, Witter and most recently Brook all became world champions.

There are many more who won neither fame nor fortune but whose lives were changed by the wisdom and attention by the man who arrived in the UK from Dublin in the late 1950s.

Champions and journeymen, Ingle treated them all the same. Few trainers in any sport, anywhere in the world can claim to cater for the elite and the grassroots, even fewer have made as lasting an impact on their sport as Brendan Ingle.

Former WBA lightweight world champion Anthony Crolla: Just seen the sad news about Brendan Ingle. What he created at the Wincobank gym with his sons and others is a very special piece in British boxing history.

British heavyweight Tony Bellew: Brendan Ingle has left a legacy that very few can ever compare to. So sad.

Promoter Eddie Hearn: A sad day for boxing, he did so much for the sport and the community. Our thoughts with Dom, John and all the family. Rest in Peace.

Trainer Dave Coldwell: RIP Brendan Ingle. The man that started me off on the road to where I am. Changed so many lives that were going nowhere and did so much for the sport of boxing in the UK. Thoughts with his family, friends & all the fighters he worked with. 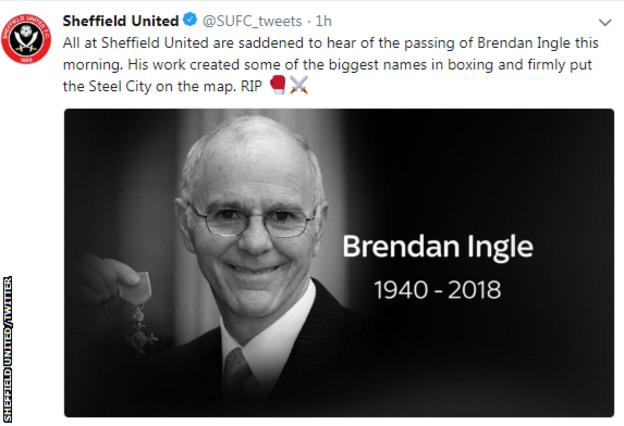 Olympic gold medallist Nicola Adams: One of the most important figures in British boxing. Over the years he's taught me a lot, not just skill and technique but how to be a confident person in and outside of the ring. He was a wonderful man and I'll miss him. My heart goes out to his family.

Ring announcer Michael Buffer: Heartbreaking news to wake up to... the passing of a great member of the boxing world. Trainer of champions, mentor to many - all will miss that wonderful Irish smile.