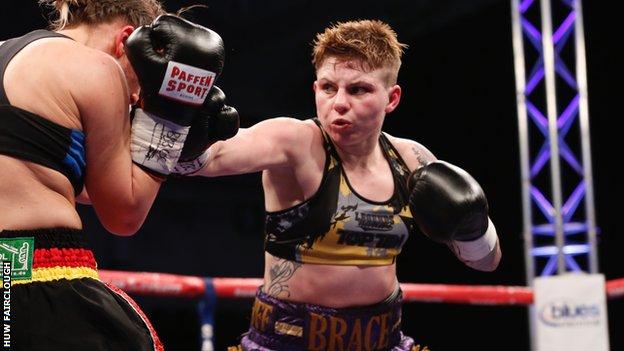 Brace drew her last fight against Melania Sorroche at bantamweight, but she was impressive in this one and won by a wide margin on the scorecards.

On the undercard Liam Williams returned to action after defeats to Liam Smith by becoming the first fighter to stop journeyman Darryl Sharp.

Brace's first title was won routinely compared to the drama in the Sorroche fight with the Welsh boxer now looking for a chance to fight Adams.

"Winning the title is just absolutely fantastic, it is an unbelievable feeling," Brace told S4C after the fight.

"It has been in the press, I've gone down in weight and Nicola Adams happens to be at this weight," Brace said.

Williams has not competed since losing a world title eliminator against Smith in Newcastle in November.

Williams' scheduled opponent Anatoli Humanyan failed to arrive for the show and was replaced by Sharp, who came into the contest with only five wins from 37 fights.

However, the third round stoppage at Ice Arena Wales was the first time in Sharp's career he had lost inside the distance.

Former Commonwealth champion Bradley Pryce will retire after losing for the 25th time in his career against Kieran Gething. There were also wins for prospects Gavin Gwyne and Nathan Thorley.