Benn, 53, and Collins, 52, have told BBC Sport they have agreed to meet again, 21 years after their last fight.

"If it was a charity match, the British Boxing Board of Control might turn a blind eye," said Bunce. "But neither would make enough money."

Benn told 5 live there were "other avenues" for getting a licence.

British fighters David Haye and Dereck Chisora obtained clearance from Luxembourg's boxing federation prior to their fight at Upton Park in July 2012.

"They will not fight in this country under BBBofC rules," said Bunce. "You can forget that.

"That means it will take place under a Maltese licence or some other foreign body."

Londoner Benn feels he could convince the BBBofC that he is fit enough to compete.

But Dublin-born Collins, who beat Benn twice in 1996, and leading promoter Eddie Hearn do not think the organisation will sanction the fight.

BBBofC general secretary Robert Smith said on Thursday that neither Benn nor Collins had applied for a licence to fight again.

He said the only age limit imposed on those applying is they must be over 18, but added: "The older you get, the more unlikely it is."

Smith said he would be "surprised" if anyone wanted to promote the fight. 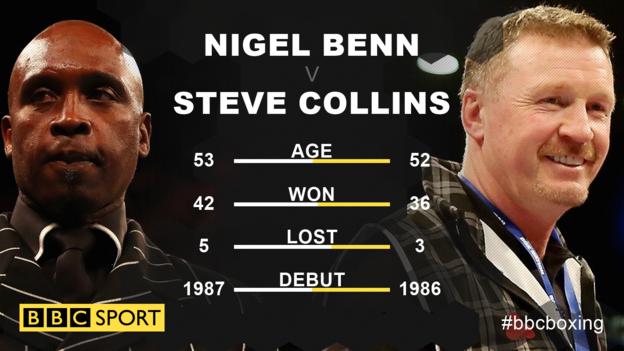 The BBBofC seeks to "minimise risk" and ensure boxers are "fully prepared" when giving the go-ahead for them to compete.

Both Benn and Collins say they are healthy.

"They have been close to having fights. Two weeks ago they sat together at a dinner and the penny dropped.

"What is good about this is both of them know they can only fight men of the same age, with the same amount of decline, stamina loss and power loss.

"They are peak for their age but they are their age. At some point, after five or 10 minutes, they will be blowing hard."

Collins says his motivation is purely financial, while Benn hopes to find "closure" from boxing and insists he is fitter than late in a career which ended with his second defeat by Collins.

But his son Conor, who is unbeaten in six fights as a welterweight, feels Benn should "leave it" and says he would refuse to work in his corner on fight night.

Collins' son, Steve Collins Jr, is also a boxer and has lost just one of his 12 fights at light-heavyweight.

After BBC Sport published news of the potential bout involving his father, he tweeted: "When I'm 50-something and have a mid-life crisis, I will just buy a new motorbike. You get me."

Hearn, who oversees Matchroom Sport's boxing events, told Sky Sports: "It would be almost sad to see those guys return to the ring.

"Nigel is in great shape. I watched him growing up and he's one of my favourite fighters of all time.

"For me, sit on the sofa and enjoy the legacy you created in this sport."

80 comments
Back to top
unknown