IBF heavyweight champion Anthony Joshua believes he will take "another step towards greatness" when he meets Wladimir Klitschko in the richest bout in British boxing history.

Joshua, 27, will defend his title and bid for the vacant WBA strap in front of a post-war record boxing crowd of 90,000 at Wembley Stadium in just his 19th professional fight.

Klitschko, 41, was unbeaten in 11 years prior to defeat to Tyson Fury in his last fight in November 2015 and says he is "obsessed" with overcoming the Briton.

"I will always stand up to the competition," said Joshua. "There is no fear at all which trembles through the body."

"You can talk about experience but even when I faced guys with less experience I took them as world championship fights. I have prepared since day one for this.

"April 29 is just another stepping stone towards greatness."

Joshua weighed in at 17st 12lbs on Friday - the heaviest of his career and some 10lbs more than Klitschko, who came in 5lbs lighter than when he faced Tyson Fury in November 2015.

'A global night for the history books'

The £30m showdown between the former sparring partners has been dubbed a fight for "the history books" by Joshua's promoter Eddie Hearn.

It will be expected to sell roughly a million times on pay-per-view television in the UK, is being broadcast in Germany and has achieved a rare feat in the US market as rival broadcasters Showtime and HBO will both transmit the bout.

"Only twice before have they done it - Lennox Lewis versus Mike Tyson and Floyd Mayweather versus Manny Pacquiao," said Hearn.

Klitschko has already fought in the US a dozen times but Joshua, who looks destined to follow the likes of Lewis into US-based super bouts, is yet to fight professionally outside of the UK.

"He has the ultimate test," added Hearn. "A test which should come maybe after 27 or 28 fights. Why risk it now? He wants to challenge himself. Is he the guy everyone talks about as the future of boxing?"

The numbers and an experience gap

Joshua's procession to a world title - captured in just 34 career rounds when he floored American Charles Martin in 2016 - has led to him being installed as odds-on-favourite against Klitschko with bookmakers.

He has contested just 44 rounds as a professional, a tally surpassed by Klitschko in his last five fights alone, with the 41-year-old Ukrainian hardened by 358 rounds as a pro, spanning 68 fights, 64 wins and more than 20 years.

Indeed, London 2012 gold medallist Joshua was only six when Klitschko topped the podium at the 1996 Atlanta Games. In the pro game, he has felt the heat of a world title fight three times, this will be Klitschko's 29th.

With both men similar in stature, the gap in age and experience has been central to much of the pre-fight debate.

Joshua's trainer Rob McCracken said: "As good as Klitschko has been, Father Time is a terrible person when he shows up and I think he already has.

"It is going to be tough for Wladimir, he doesn't know himself if it's still there or not. He's against a ferocious opponent on Saturday night, that's for sure."

But what if? 'The fight of his life' 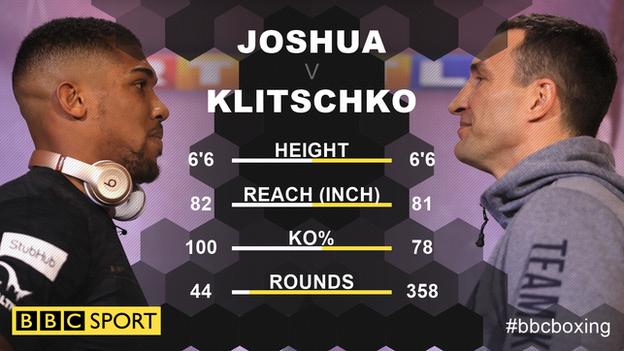 Klitschko can be destructive too. His tally of 53 knockouts surpasses the great Joe Louis by one and the wrecking ball that was Mike Tyson by nine.

In 2013, he dropped the respected Alexander Povetkin four times. The Russian had never lost and has not done so since.

Klitschko is adamant his career will not fade after defeat to Fury and he has come back from torment before after losing world title fights to the likes of Corrie Sanders in 2003 and Lamon Brewster a year later.

"Nobody is perfect," Klitschko's brother Vitali told BBC Radio 5 live. "Everyone has strong sides and weak sides. Wladimir's weak side is his concentration.

"That cost him the title against Fury. I've never seen him focused like this. If he is concentrating 100%, Joshua does not have a chance. Wladimir understands this is the fight of his life."

Does Klitschko have anything left?

Can Joshua go seven, eight, nine rounds, hard rounds? Will he still look as invincible in round seven or eight as he has in 18 fights?

I think an awful lot has been placed on the assumption, the dream, hope, that Wladimir, at 41 has nothing left. If that's not the case then we are in for a tricky night.

While Joshua's social media offerings have showcased chats with celebrities such as Dwayne 'The Rock' Johnson and American rap artist Dr. Dre in recent weeks, footage of his gruelling training regime has also been free flowing.

Reaction drills such as dodging agility sticks to chase tennis balls, intense sessions on a watt bike and workouts in a leg-sapping sand pit have all been captured on camera.

Smoothies form a key part of his diet in order to increase his calorie intake and replace fluids lost when sweating, as it is not uncommon for Joshua to lose 3kg through sweat alone during a session.

So if you want to start your Saturday in the same way the champion begins a training day, opt for a healthy smoothie, workout and then follow up with as many as five eggs on wholemeal bread.

Get all the latest boxing news leading up to the Joshua-Klitschko fight, sent straight to your device with notifications in the BBC Sport app. Find out more here.