British middleweight Tommy Langford is confident victory over Avtandil Khurtsidze on Saturday will pave the way for a shot at compatriot and WBO world champion Billy Joe Saunders.

Langford meets the Georgian at Leicester Arena, with the winner claiming the WBO interim title to become Saunders' mandatory challenger.

"This means I can't be avoided so I have to win this fight," said Langford, 27. "I've never been shy about saying I'd fancy the Billy Joe fight, and I fancy myself to beat Billy Joe."

Saunders - undefeated in 24 fights - hopes to meet WBA, WBC and IBF champion Gennady Golovkin in a unification match this summer.

He has defended his title once since winning it in December 2015 and although he spoke earlier in the year of being confident of announcing a big fight, it has yet to materialise.

Langford added: "Originally you're thinking that the Golovkin fight would happen in the meantime, and you're going to be there as a certainty to fight the winner. But if [Saunders] doesn't get that - and it's looking more suspect now - then [a mandatory defence] has to happen." 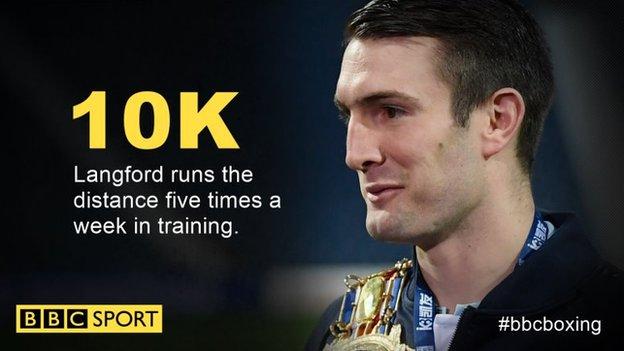 Langford is undefeated in 18 contests and captured the British title in his last bout. He is the WBO's number-three ranked fighter, with Khurtsidze number one.

In the build-up to the bout, the West Bromwich Albion fanatic - nicknamed 'the Baggies Bomber' - has been supported by some of the club's players in the gym, and he says one day he wants to fight at the club's stadium.

Nicknamed 'mini Mike Tyson', Khurtsidze has a record of 32 wins, two draws and two losses. At 5ft 4in, he is eight inches shorter than Langford.

"It will be an honour to add the first loss to Tommy Langford's record," said Khurtsidze. "After I defeat Langford, Saunders is next."