Ricky Burns believes he faces the "biggest fight" of his career against IBF and IBO champion Julius Indongo.

Burns defends his WBA super-lightweight belt on Saturday, and believes he can overcome his Namibian foe in Glasgow.

Southpaw Indongo won the IBF title by knocking out Eduard Troyanovsky 40 seconds into their contest in December.

"If I can unify the division and add another world title to the collection, it doesn't get any bigger than that," said 34-year-old Scot Burns.

"We know we've got a tough fight on our hands. It's going to be a tricky opponent, but preparation has gone well.

"He's tall, he has a height and reach advantage over me and he's a southpaw which makes him even more awkward, but the sparring has been great. We're confident that whatever comes our way, we'll be able to deal with it.

"Mentally, I'm always prepared for whatever's coming my way and I'm not afraid to lose. I will fight anybody they put in front of me. I will always give it 100%. I'm looking forward to it."

Burns, who celebrated his birthday on Thursday, weighed in at 9st 13lb, as did Indongo. 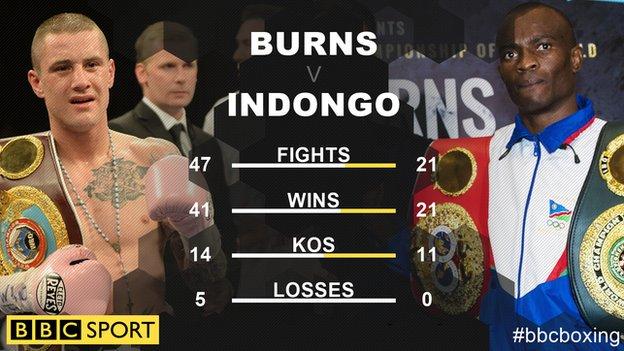 'Burns knows too much'

Burns is only the third British fighter to have won world titles at three different weights, and victory would make him Scotland's first unified champion.

That would open up the possibility of a lucrative rematch with American Terence Crawford, the WBC and WBO super-lightweight champion, who defeated Burns in March 2014.

Steve Bunce, BBC Radio 5 live's boxing pundit, said: "You look at Burns' record - six or seven years of title fights, a three-weight world champion, one of only three Britons to do that in the last 120-odd years... you'd be shocked if Burns walked on to one of those punches.

"If this was a 21-year-old African with a couple of quick wins under his belt, you'd be a bit more alarmed.

"He can bang but I just fancy Burns knows too much. We underestimate Burns, he's been going under the radar too long."

Namibia to Moscow: Who is Julius Indongo?

One huge left hand brought Indongo to prominence. Fighting outside Namibia for the first time in his professional career, it took less than a minute for him to grab the IBF belt from Troyanovsky.

Undefeated in 21 contests, he was unfazed by the home crowd in Moscow and he also fought abroad when he competed in the 2008 Olympics in Beijing.

The 34-year-old believes he is fighting on behalf of his country and his continent, revealing the Namibian president had phoned him to wish him luck and tell him to keep his guard up.

"It's going to be an amazing night, when the impossible can become possible, things I never expected in life, whereby the world is going to know where I came from," Indongo said.

"I can promote my country at large, and believe me, the night is going to be an exciting one that nobody will ever have expected it to be. I'm going to give my all. I trust myself and it's not easy to reach this level. Nobody thought I would be where I am now.

"It's not easy to fight outside home, I have to adapt to the situation. My aim is to take victory home. I'm undefeated. He already knows how losing feels.

"My talent will prove to people who I am. I will give what I have and what the world doesn't know about."