The pair again traded insults at London's O2 Arena, where Haye starts as odds-on favourite with the bookmakers.

"I don't think it's a foregone conclusion. Everyone is saying a Haye early knockout but I think it will be a tough fight for him."

Bermondsey-born Haye was cheered by a big crowd at Friday's weigh-in as he prepares to fight at a venue just six miles from where he grew up.

Only once in his 30-fight career has he weighed in heavier than for this bout.

The former WBA heavyweight champion mocked the physique of Bellew, who said he was "over the moon" to see his rival so heavy.

Will Haye run out of gas? 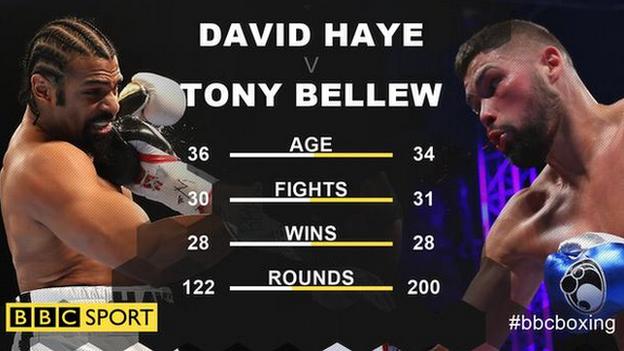 Bellew, who as recently as 2013 was fighting two weight classes lower, reiterated his belief Haye would be short on stamina in just his third fight since returning from over three years out of the sport.

Woodhall believes Haye will be "extremely dangerous" early in the fight and expects Bellew to build his tactics around dragging a knockout specialist - who has been in just three 12-round contests - into the latter rounds.

"It's a classic case of who will land the big shot," added 1988 Olympic bronze medallist Woodhall.

"Bellew's first goal will be to get through the first four rounds, when we know Haye is at his most explosive. If he gets through he will not be home and dry by any means but his fight will then start and he can think about trying to break Haye down.

"The one thing against Haye is he's only fought a couple of times since 2012. I think he will solely rely on getting Bellew out early."

'Neither one of them will be proud'

Haye has been criticised for graphic descriptions of how he intends to hurt his opponent, while Bellew has actively pursued the fight, calling his foe out publicly from the ring after a routine win in October.

The feud has meant both fighters have been kept apart by security in fight week, and the pre-fight face-off was also conducted with people between them.

British Boxing Board of Control general secretary Robert Smith has expressed his disappointment in their behaviour.

"When it's all over, they will look back and neither one of them will be proud of beforehand," added Woodhall, 48. "You have to have a balance. We all want the fight to sell but you don't want people pointing the finger at the sport of boxing.

"Psychologically, I think Bellew has played a blinder. Haye has to control his emotions early on. If he ends up swinging early on, missing the target, then the tide turns. I think Bellew wants Haye to come out very aggressively."

Haye is attempting to improve his record of 28 wins from 30 fights, while Bellew has 28 wins, two losses and one draw on his record.

Intrigue on the undercard

The bitterness between Haye and Bellew has been mirrored by super-lightweight rivals Derry Mathews and Ohara Davies.

The pair have engaged in insulting social media exchanges and expletive-laden rants before a bout which is the biggest of Davies' 14-fight career, and could help 33-year-old Mathews keep hopes of another world-title shot alive.

Malignaggi, 36, has been a world champion at two weights and has shared a ring with stellar names such as Amir Khan, Adrian Broner and Danny Garcia.

Wales' IBF featherweight champion Lee Selby will contest a non-title bout against Spain's Andoni Gago, while Ireland's London 2012 Olympic champion Katie Taylor enters her third fight as a professional when she faces Italy's Monica Gentili, who has six wins and as many losses in her career.