Anthony Joshua doesn't really want to be fighting Dominic Breazeale on Saturday. Many fans aren't too fussed either. But elite heavyweight boxing tends to be a series of frustrations punctuated by an occasional ecstatic release.

The Twitter timeline of Eddie Hearn shows how deep these frustrations run. Joshua's promoter is constantly told his charge should be thrown in with Tyson Fury or David Haye, instead of these rusting tomato cans and bums. But Hearn understands that matchmaking in heavyweight boxing is a devilishly delicate business, like trying to balance a couple of elephants on a set of kitchen scales.

Handling a heavyweight prospect is not much different to handling a racehorse. It's about knowing when to rest them up, when to step them up and when to retire them. And, most of all, it's about making as much money as possible.

"It frustrates me that the public don't understand what goes on behind the scenes," says the 26-year-old Joshua, who won the IBF world title in only his 16th pro fight in April, courtesy of a brutal second-round knockout of the previously unbeaten but horribly overmatched Charles Martin.

"I'm interested in fighting Fury; I want to fight all the big names now. But the people guiding my career are looking long-term. Breazeale has had almost the same number of fights as me [he is unbeaten in 17], he's tall, he's rangy, so it should be good preparation for someone like Fury.

"There's no point trying to explain it to the doubters - you are always going to be wrong. I'll make sure these big fights happen eventually, so that I'll be giving back. And I know what I'm doing in the meantime, that's the main thing."

Ironically, given that the IBF has announced it will strip any of its champions who choose to fight at the Olympics - to "protect the welfare" of amateur boxers - Joshua has prepared for the Breazeale fight by getting bashed up by Britain's amateurs in Sheffield. It has been a rough reminder of what made him.

"Going back to spar with the amateurs was difficult," says Joshua, who won super-heavyweight gold at the London Olympics and has recently been sparring Rio qualifier Joe Joyce and team-mate Frazer Clarke.

"They're so quick for three rounds and are basically all top-end professionals [many of the GB team fight in World Series Boxing, which is a professional arm of 'amateur' boxing]."

Hearn chips in: "We go up there and the GB boys are saying: 'Great, we've got some pros to bash up!' Kevin Mitchell [the former two-time world lightweight title challenger] said it felt like he had whiplash when he came up here."

Another irony: when Joshua first arrived in Sheffield as an ABA champion, he found the going so rough he seriously thought about quitting and turning pro. Mike Tyson might have been right when he said the main reason pros fighting at the Olympics was ridiculous was because the amateurs would beat them.

"When I first went up there, I thought: 'What the hell is this? These guys are trying to kill me'," says Joshua, who only took up boxing at 18. "I was getting battered, dropped, training four times a day. It was like a boot camp.

"At the time I was on £500 a month and still getting into trouble [outside of the ring], so I thought about making money in other ways. Plus, Derek Chisora was from my gym [Finchley ABC], had won the ABAs and turned pro, so there was a formula that worked without having to do all the extra graft.

"But one of the physios took me aside and said: 'Look, if you think people are going to respect you because you've won an ABA title, you've got another thing coming.' That's when I started understanding about levels. GB Boxing made me find that next level. They took that rawness and started to polish it."

Joshua returned to Sheffield because, from the moment he made his pro debut in 2013, he was no longer under the radar. A prospect with 16 fights to his name would normally be learning his craft by sparring top names. But when you're a world champion with 16 knockouts on your record, those doors remain closed. 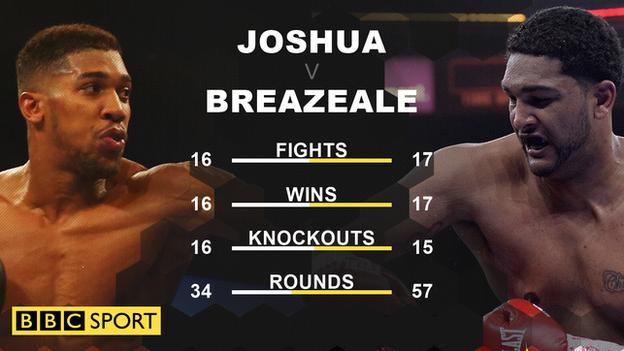 If all goes to plan and he beats Breazeale at London's O2 arena, Joshua might spend his summer sparring Joyce in Rio. Joshua is heading to Brazil as a BBC pundit, but it would still be a classy act from a man who wants to give back.

"Joe will be in peak condition and he's got one of the best engines I've ever seen," says Joshua. "He'll be punching me all over the place. The choice is the Copacabana or some dirty gym in a holding camp. But I'd love to help Joe."

As well as Olympics future, Joshua also has an eye on Olympics past. Against Breazeale, Joshua says he will wear an all-white gown and shorts as a tribute to Muhammad Ali, who won gold in 1960 and passed away earlier this month.

They built heavyweights tougher in Ali's day and the talent ran deeper. But even 'The Greatest' had to be seasoned before the reins were loosened.

Fury, the WBA and WBO champion who faces Wladimir Klitschko in a rematch on 9 July, can wait until Joshua has sharpened his tools sufficiently, and there isn't a stadium big enough to hold a contest between the two. It might be next summer, it might be next autumn, but that ecstatic release will happen.

"Until now I've been knocking them out subconsciously," says Joshua. "But I want to control a fight from start to finish, be able to say: 'No, I won't throw now, wait and it will come.'

"I'd like to take that confidence into the ring - slip, dance, make it longer. You never know, I might even try an Ali shuffle."