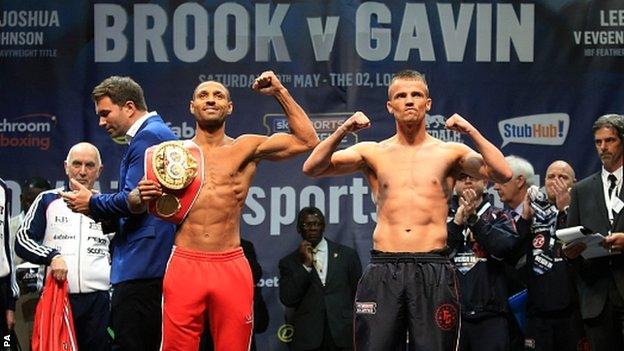 Kell Brook wants to send a message to the rest of the welterweight division when he defends his IBF world title against Frankie Gavin on Saturday.

Unbeaten Brook, 29, had wanted a fight with Amir Khan only for his British rival to take a bout with American Chris Algieri in New York instead.

"I want to make the statement that I'm the man in this division," said Brook.

Kevin Mitchell and Lee Selby both fight for world titles on the undercard while Anthony Joshua is also in action.

Heavyweight Joshua, 25, an Olympic gold medallist, will take a step up in class against American Kevin Johnson having eased to victory inside three rounds against his previous 12 opponents.

Sheffield fighter Brook will look to extend his record to 35 wins in the all-British bout against Birmingham's Gavin, 29, at London's O2 Arena.

"I'm looking to seek and destroy and prove I'm the number one in the world in the division," Brook added.

Gavin says the performance of former Olympic team-mate James DeGale, who was crowned IBF super-middleweight world champion with a points victory over Andre Dirrell last Saturday, has given him extra motivation.

"James DeGale did it last weekend and he was in the same squad as me. That's given me the belief I can do it," said Gavin, who was Britain's first ever amateur world champion in 2007.

"Last year fighting for the world title looked like a long shot for me, but it's come now."