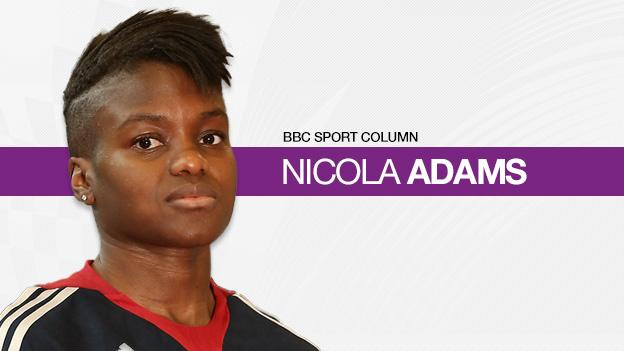 It will come as no surprise to learn I had no female boxers to look up to when I was younger. My heroes were all men.

I grew up in a boxing-mad family in Leeds, idolising Muhammad Ali and Sugar Ray Leonard. I remember watching videos of their fights and thinking it would be cool to do the same.

I liked their personalities, their flashy styles, the way they entertained the crowd.

Would I have benefitted from having a female boxer to idolise? It's not something I thought about when I was 12 years old. Even though women didn't really box and weren't allowed to fight at the Olympics, I still dreamed of being an Olympic champion.

In some respects, it doesn't matter who inspires you. But it perhaps would have been nice to have had female trailblazers, someone to follow and show me it was possible to achieve my ambitions. 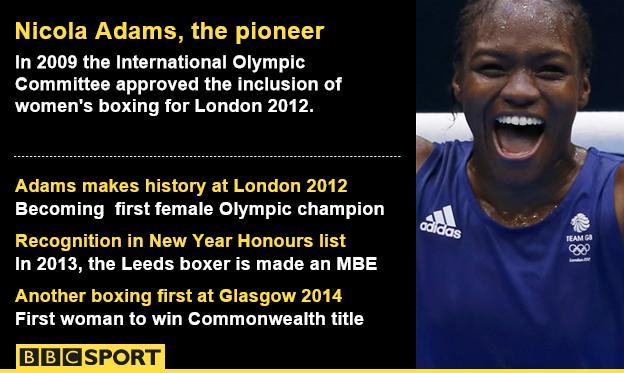 It is difficult following a path no-one else has trodden. When I was younger, female boxers didn't receive any funding. I've been boxing internationally since 2001 and for a long time I was the one who would book the flights and pay for the hotels.

We didn't have any support. During international tournaments we would often ask the Irish team if we could use their physiotherapists, and when I say 'we' I mean me and a couple of other girls. There weren't many of us.

It was tough. It was mainly my mum who funded it all. She had to work damn hard to keep my dream alive and I owe her a lot. I've since tried to buy her a house but she doesn't want to move!

My debt to her, though, is more than a financial one. There were occasions when I wanted to give up and didn't think I could keep going but she was there for me.

Having famous role models is one thing, but it's important to have a good family network too, because they're the ones who pick up the pieces when it goes wrong.

It's your mum who washes your sweaty trainers and cooks the meals. When it feels like you can't go on, it's those closest to you who motivate you.

Young female boxers are better supported now. It's a lot easier for them to achieve their dreams because the set-up is there: physios, coaches, sport psychologists.

That's all been made possible by the boxers of the past. The sacrifices I and others made will hopefully help inspire another generation of female gold medallists.

After 2012 there was a 50 per cent increase in the number of women boxing and female participation has continued to increase.

It's noticeable there are more women in the crowd during fights and I'm surprised by the number of girls who follow me on Instagram.

I'm aware I'm a role model. The messages I receive are a constant reminder of that. But, in a way, I've always been a leader, always been the first to achieve things in the ring.

Admittedly, what I achieved in London 2012 was on a much larger scale and while I quickly came to terms with being an Olympic champion, it took me longer to get used to being recognised.

I didn't think I'd be a pioneer but a few weeks after winning gold there was a 'wow' moment, when it sunk in I'd become the first woman to win Olympic boxing gold.

What does being a role model mean? I think it's about inspiring others to do good, to get into sport.

I do the same things I did before London 2012; I go to the gym, I train, I'm just myself because that's what got me to where I am today.

But kids now look up to me and think they can also achieve something great because I have. It's an honour to think I'm inspiring so many girls to get into the sport I love. I'm happy I'm able to give them that motivation to succeed - and not necessarily only in sport but in life, too.

This year, I'm an ambassador for Fight for Peace, a charity which uses boxing and martial arts, combined with education and personal development, to help young people in deprived areas.

It's a way to get disadvantaged kids into sport and support them to study or find jobs.

Over the next year, I'll be attending training sessions and just chatting to these kids. When I walk into a room, I can see their eyes light up and they're really happy I've taken the time to visit and watch them train.

I would have been over the moon had a hero of mine come to visit my gym when I was younger. It's something I would have talked about for years and years.

These days I get asked lots of questions all the time and, as I've already mentioned, I receive lots of messages - about sport and about life. People tell me I've encouraged them to go to the gym and helped them lose weight.

I also receive lots of messages from people because of my sexuality. It's nice to think that just because I'm open about being bisexual, other girls feel they can be open about who they are too.

They're not afraid and that's important. It's amazing to think I can have such an effect on people.

But women need more sporting role models and the only way that's going to happen is to have more coverage of women's sport on TV and in the media generally.

During London 2012 it became normal to see sportswomen on our screens and newspapers. That needs to become the norm again because women need to see for themselves that it's possible to be successful.