Floyd Mayweather and Manny Pacquiao weighed in as 11,500 fans watched on ahead of the most lucrative fight in history in Las Vegas on Saturday.

American Mayweather scaled 146lb - one pound under the welterweight limit - and Pacquiao of the Philippines 145lb.

The pair will fight for the WBC, WBA and WBO welterweight titles.

"I believe that with my skills, I'm going to be victorious," said the 38-year-old Mayweather, who is unbeaten in 47 professional fights.

"I don't take anything away from Manny Pacquiao, he's a solid fighter and it will be an intriguing match-up.

Pacquiao, who has 57 wins and five defeats from 64 pro fights, said: "It's a great responsibility for me to give enjoyment to the fans. The fans deserve to have a good fight, whether they are a fan of Mayweather or Pacquiao.

"The Lord will always be with me and strengthen me and deliver him into my hands."

Asked about the difference in size - Mayweather is 5ft 8ins and Pacquiao 5ft 6½ins with a reach difference of five inches in favour of the American - the Filipino southpaw added: "I've been fighting bigger guys - Oscar De La Hoya, Antonio Margarito... it doesn't matter to me."

The MGM Grand was abuzz the day before the fight, with people queuing to get into the Garden Arena hours before Mayweather and Pacquiao, 36, stepped on the scales.

It was the first time tickets had been sold for a weigh-in, with proceeds going to charity, and those that bought them were given a two-hour show.

Pacquiao was introduced to the stage first and looked relaxed, taking pictures of himself and waving to the large Philippine contingent.

Mayweather, on the other hand, was booed to the stage and looked tense, as he has done all week.

Pacquiao mouthed "thank you" to his rival as they engaged in the traditional stare-down, as a good-natured build-up continued.

"I don't know what he exactly said. No, I didn't respond," said Mayweather,

The MGM Grand Garden Arena holds 16,000 but as few as 500 tickets for the fight went on sale to the general public.

Tickets are changing hands on the resale market for as much as $350,000, while some have been prepared to pay $3,500 to watch the fight in one of 10 closed-circuit venues along the Las Vegas Strip.

Given the astronomical numbers involved, the fact this is a match-up between two of the greatest boxers ever has been forgotten by some. 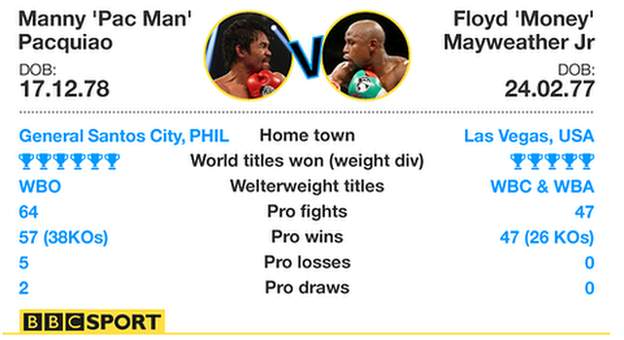 Mayweather and Pacquiao have won world titles in five and six different weight divisions respectively. Whoever wins this weekend will be able to claim they are the best fighter of their era.

Pacquiao's trainer, Freddie Roach, admitted the remorseless hype had been hard to cope with.

"I've always liked big fights because I like big challenges," said Roach, who was in Oscar De la Hoya's corner when Mayweather beat him in 2007. "But, with this one, I might have bitten off more than I can chew.

"We're fighting a very good defensive fighter, but I'm one of those guys that believes offence wins fights. I think we'll overwhelm him with speed."

Roach felt both fighters had "declined a little bit", adding: "I've been watching Floyd's legs and they're not as good as they used to be. He doesn't move as fluently as he used to.

"We can knock him out late, but I really want to beat him on points. Either way, no problem."

Roach said Mayweather's relatively subdued mood in the build-up to the fight could be a sign that he is apprehensive about facing Pacquiao.

"At the first press conference, I told him we were going to kick his ass," said the 55-year-old American.

"I thought I was going to get something back, but we got nothing. He's been so nice, I really don't think he wants to be here."

Mayweather responded: "The camp went extremely smooth. I don't need to trash Manny Pacquiao, I know what I can do."