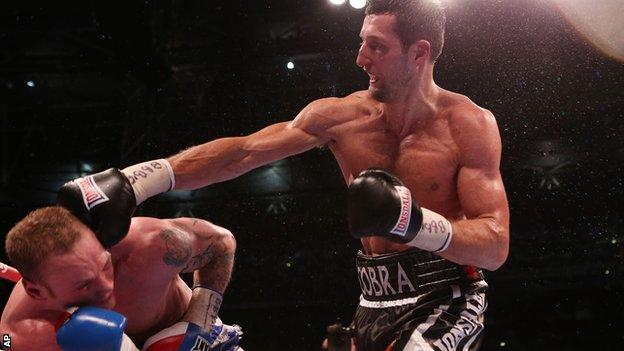 Your feet were an inch too close. Your head was an inch too low. You planted your legs and threw rather than hiding behind your gloves. In the unforgiving sport of boxing, this is all it takes - a twinkling jumble of mistakes.

But if George Groves wanted to be forgiven for his mistakes he should have taken up tennis. Miscalculate on Centre Court and you might just lose a point. Miscalculate between the ropes and you're unconscious on the canvas.

"I deviated from the game plan for a split second," said Groves, who was knocked cold in the eighth round by Carl Froch at Wembley Stadium. "I got complacent, allowed him into range and I paid the price."

"You won't throw another shot like Carl Froch's knockout blow in your career, it was a peach. I thought Groves was busy but he was getting slower and slower, he was getting more predictable and Froch landed the punch."

It will be of no consolation to Groves that the punch that made him see fairies was one of the greatest ever landed in a British ring. Rocky Marciano had his 'Suzie Q', the punch that knocked out Jersey Joe Walcott in their heavyweight world title fight back in 1952. Froch now has his 'Georgia Peach'.

"How do you define a great punch?" said Froch. Your opponent laid out on the boards, eyes flickering like a faulty strip light, leg horribly bent. That'll do it.

"That was the best punch I've thrown in my life," added Froch, still the IBF and WBA super-middleweight champion. "It landed lovely, closed the show."

And what a show to close. Eighty thousand fans, outdoors in a ball park in the capital, witnessing two men baring their souls in a spot-lit ring. Prize fighting at that level is less a sport and more a giant psychotherapy session. 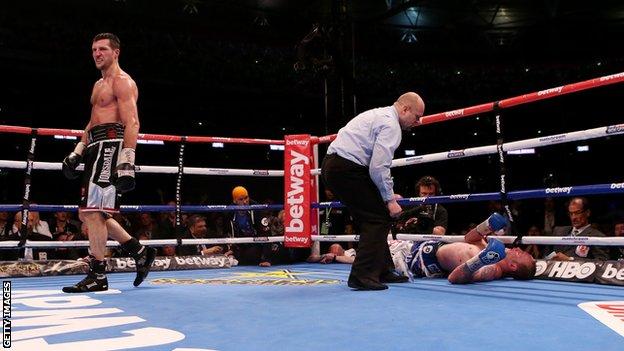 "I've got ingredients you can't teach, ingredients you're born with," said Froch, telling us what we already knew. "Toughness, heart, determination, spite. George is missing toughness at the top level and he can't stand up to it."

Rematches are often more cautious affairs than the originals and this one was no different. Having already tasted each other's venom they had every right to keep their distance - it was the natural and sane thing to do.

Given the size of the ring, which resembled a glorified phone booth, it was difficult to stay distant for too long. And while Froch took a more measured approach in the early rounds, using his jab, keeping his shape, limiting himself to two-shot combinations, by the middle rounds he had Groves in his crosshairs.

Two of the three judges had Froch in front when the end came but it could quite easily have been the other way around. Groves landed plenty of sharp jabs and trademark right hands, Froch was on top when they got close and personal.

"I felt like I was winning comfortably," said Groves. "I was dominating him with the jab, beating him for hand speed. I hurt him, stood him up. But Carl is a seasoned world champion and there's no quit in him."

Certainly not in the ring. Find a nice space in the centre of Nottingham, commission a sculptor, mix up some bronze and erect a statue of Froch. It is unlikely that city will produce anyone as hard as him again.

But having racked up 35 professional contests over 12 years, including 12 straight world title fights, no-one would be surprised if Froch has an epiphany on his sun lounger during his well-earned holiday.

"I've got a beautiful girlfriend," Froch might think, "two beautiful kids, lots of cash, plenty of nice things - do I really need to keep flogging myself and getting my brains bashed in?" 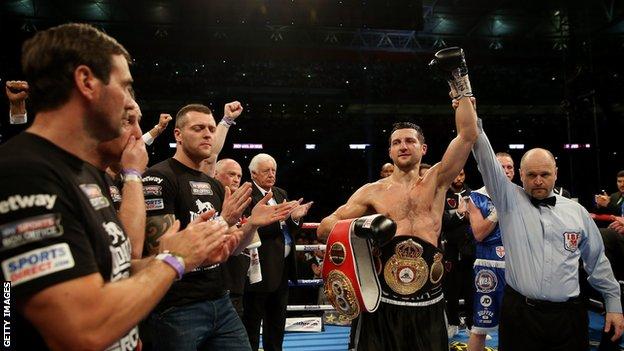 If the answer is "yes" - and you suspect it will be - expect Froch to swerve Groves's old rival and former Olympic champion James DeGale, who dazzled on the Wembley undercard with a four-round demolition of rated American Brandon Gonzales, and plump for a swansong in Las Vegas instead.

"I'm not saying that's the end but that will be hard to top," said Froch. "But there is one box that's not ticked and that's Las Vegas, the fight capital of the world. It would be nice to do that before I bow out."

Having completed two mandatory defences in a row, Froch is not obliged to fight DeGale, who is the IBF's number one contender. And a big fight in the United States against a big-name American has the advantage of dual pay per view and the extra revenue that brings. It seems like a no-brainer.

Froch's promoter Eddie Hearn mentioned tough Mexican Julio Cesar Chavez Jr and hard-hitting WBA middleweight champion Gennady Golovkin, the mere mention of whom brings on headaches. Let's hope Froch gets sound advice, because a heart is one of the best and worst things to have in boxing.

As for Groves, his new promoter, Germany's Kalle Sauerland, claims he knows who he will be fighting next. It is unlikely to be WBO title-holder Arthur Abraham, who is expected to defend against Liverpool's Paul Smith in the autumn. But it could be WBC champion Sakio Bika, who was ringside at Wembley. Groves would be best advised to take a less painful route.

At 26, the Londoner has time on his side and doesn't need to make rash decisions. Another brutal defeat by another seasoned world champion and that could be it. Reputation in tatters, confidence shot, considering another living.

On a wild night at Wembley, it was a tale of small mistakes with big implications. And more proof that when boxing gets it right there is no sport as thrilling. Hearn built it and they came in droves. More of the same, please.