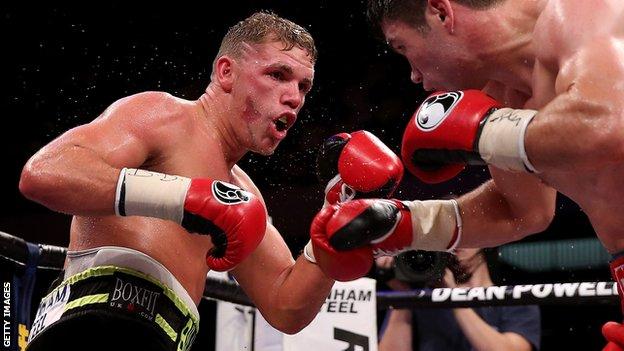 Billy Joe Saunders has laid out his aim to become the first world champion from Britain's travelling community.

British middleweight champion Saunders, 24, and fellow Traveller Tyson Fury could both put themselves in world title contention with bouts next month.

"It's something that will be recognised forever - the first Gypsy to win a world title," Saunders told BBC Three Counties Radio.

"If I were to win it today and Tyson tomorrow, I'm still the first one."

Tale of the travellers

He added: "But we've both got hard tasks in front of us and we can't get carried away."

Middleweight Saunders, who is from a Romany Gypsy community in Hertfordshire, will face unbeaten Italian Emanuele Blandamura, 34, on 27 July, on the undercard of Fury's world title eliminator against Dereck Chisora.

Saunders and Fury, 25, himself an Irish Traveller, are both undefeated in 19 and 22 bouts respectively.

"Fury and I are good mates, if Tyson wins a world title before me we'll have to go and sort it out in the car park," joked Saunders.

"I hope he goes and wins the world title and I'm sure he wishes the same for me. We're both setting an example for the travelling community and the wider community as well.

"He's worked hard for it, as have I and Dereck Chisora. Hopefully I can inspire people and if you can get one person off the street and into a gym it's a nice achievement."

In his last outing in September Saunders successfully defended his British and Commonwealth crowns against the previously unbeaten John Ryder.

"I've been in this sort of situation before where I have a big fight and a big one after, with O'Sullivan and then Ryder after," he said.

"It's been my dream from day one to become world champion but I've just got to keep it under wraps, keep focused, calm and just get the job done with what's put in front of me.

"They go on about how [Blandamura] is good and fit.

"If I can't beat him I'm never going to become world champion."