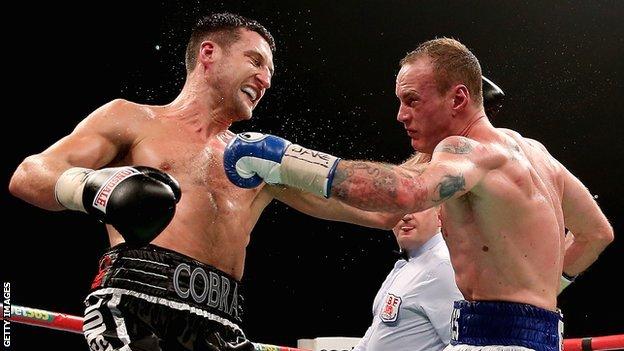 Carl Froch has sent a warning to George Groves before their rematch at Wembley Stadium on Saturday, telling his rival he "could get hurt".

Nottingham fighter Froch, 36, defends his IBF and WBA super-middleweight titles against Londoner Groves, 26, in front of a record 80,000 crowd.

"I want him stood there with me in the middle of the ring having a fight," Froch told BBC Sport.

I can beat Carl for hand speed, foot speed and I can hurt him. It doesn't matter how Carl approaches this fight, he's just not good enough

"Because there's only going to be one winner. George, you're getting stopped and you could get hurt.

"I'm looking at doing some serious business on him. Without going into details and getting into trouble, we all know what that means - and it's bad news for George Groves."

Groves has vowed to take the fight to Froch and believes the contest will resemble the legendary 'war' between Marvin Hagler and Tommy Hearns in 1985, which Hagler won via a third-round stoppage.

Groves made a sensational start to his first meeting with Froch, knocking the champion down in the opening round with a thunderous right hand.

The challenger dominated the first half of the fight but Froch came roaring back in round nine, when referee Howard Foster stopped the fight, prematurely in the eyes of most observers.

"I gave him the advantage in the first fight, allowed him to get comfortable and let his shots go," said Froch, who is taking part in his 12th successive world title fight.

"I took too many steps back but I won't be taking a backward step in this fight."

Groves, who has 19 wins (including 15 knockouts) and one defeat from 20 professional fights, is the underdog with the bookmakers but supremely confident of victory.

"If I go out and perform like I've been performing in the gym, it might not even be a fight," Groves told BBC Sport.

"I can beat Carl for hand speed, foot speed and I can hurt him. It doesn't matter how Carl approaches this fight, he's just not good enough.

Froch, who has 32 wins (23 KOs) and two defeats from 34 professional fights, claims he took Groves too lightly before their first encounter but says he will be back to his best second time around.

"The last time I remember being this intense in a camp was when I boxed Arthur Abraham," said Froch, who beat the German on a unanimous decision in 2010.

"When Mikkel Kessler beat me I was devastated - I'd lost my first pro fight, my world title and I needed to give myself a kick up the backside.

"I turn 37 in July but I feel physically in the best shape of my life. There's been no stone unturned. The runs, the sparring, the strength and conditioning work, the nutrition, the diet, the mental stuff, it's all there.

"The judges might as well not bring their pens, they're not going to need them."