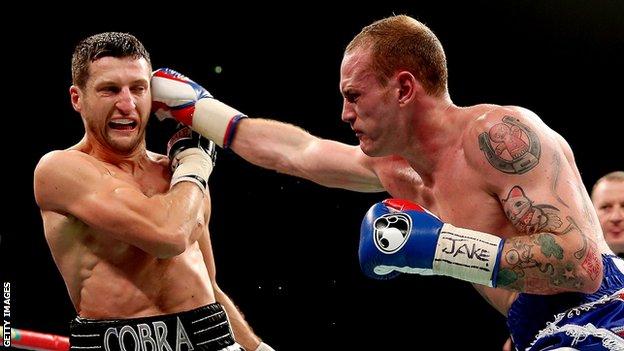 New York's Charlie Fitch is expected to referee the world title rematch between Carl Froch and George Groves on 31 May.

Froch retained his WBA and IBF super-middleweight titles with a contentious ninth-round stoppage of Groves at Manchester Arena last November.

Following what he perceived as Howard Foster's early stoppage in the first fight, Groves had insisted no Briton should referee the rematch.

But promoter Eddie Hearn says both sides have agreed on 43-year-old Fitch.

Froch-Groves II will be the first boxing bout at Wembley Stadium since it re-opened in 2007 and is likely to set a British post-War attendance record with more than 70,000 expected.

BBC Radio 5 live's boxing correspondent Mike Costello said: "The choice of referee has been a highly contentious issue. Britain's Howard Foster is generally regarded as having acted prematurely in stopping the first fight in the ninth round.

"Groves insisted on a foreign referee for the rematch, his thinking being an official from outside the UK would be less affected by the hype.

"Last week he rejected the choice of Jack Reiss, a no-nonsense Californian, but promoter Eddie Hearn says both sides have agreed on Charlie Fitch, even though the 43-year-old from New York last stood in a world title fight 18 months ago."

The appointment of Fitch still needs to be ratified by the British Boxing Board of Control and the IBF.