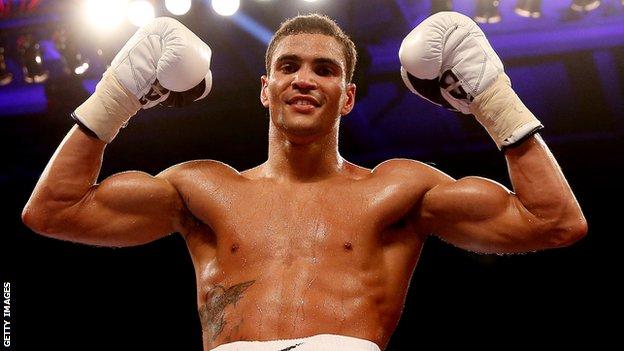 Olympic bronze medallist Anthony Ogogo will line up a fight on the card for Floyd Mayweather's welterweight unification bout against Marcos Maidana in the USA on 3 May.

"It will be absolutely unbelievable. It's exactly why I joined [promoter] Golden Boy," he told BBC Sport.

"I want those big, glamorous nights in amazing venues like the MGM Grand."

A venue has yet to be confirmed for unbeaten American Mayweather's showdown against Argentine Maidana, although the MGM Grand in Las Vegas is expected to be the preferred location.

Lowestoft's Ogogo, who won bronze at London 2012 before turning professional 14 months ago, had to pull out of a bout on the undercard of Mayweather's victory over Saul Alvarez in Vegas last year.

"When you miss out on anything you find out how much you desperately want it," said Ogogo, whose next opponent has yet to be confirmed.

"Last time I was injured and sat at home absolutely gutted. This time I will fight an hour before Mayweather and then I'll be able to watch the greatest boxer of our generation."

Ogogo overcame County Durham's O'Neill by winning all six of their rounds in Glasgow at the weekend.

It means the Suffolk fighter has two stoppages from his five fights, having won the rest by going the distance, but feels he will benefit from stepping up from six-round bouts.

"My biggest attribute is my speed and my fitness. Throughout the duration of my career you'll see a lot of knock-outs come later in fights," he said.

"The longer the fight the more I think people are going to struggle to go the distance with me.

"Greg O'Neill came to my dressing room on Saturday night and said 'thank God that was the last round'. He was clinging on for dear life at the end."