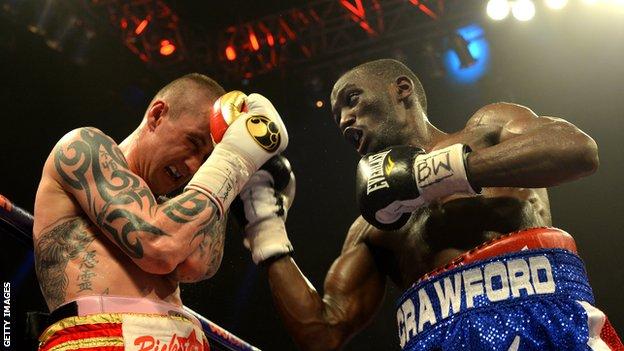 Ricky Burns suffered his first defeat in seven years as he lost his WBO world lightweight title to Terence Crawford on a unanimous points decision.

"The better man won," said Burns, who lost for the third time in 40 fights.

"There are some big fights out there for me but my first choice would be a rematch."

Former Olympic gold medallist Crawford was the bookmakers' favourite to beat Burns, who broke his right jaw in his drawn bout against Raymundo Beltran in September.

Burns began his latest defence briskly, his jab finding its target several times in the opening round and, even though Crawford switched to southpaw, the Scot was largely untroubled after six minutes of fighting.

But Crawford - now unbeaten in 23 fights, including 16 knockouts - gradually took control of the fight and there was little to dispute in the judges' decision.

Burns told BBC Scotland: "We knew it was going to be difficult. I knew how good he was.

"I'd like to keep fighting at world level. I think I proved tonight that I definitely do belong there.

"I'm definitely going to stay at lightweight. I made the weight comfortably."

Burns's last five contests have been in Glasgow. Asked how he would view fighting elsewhere, he replied: "Fighting in Scotland, especially with the fans I've got, it's always a great night.

"Those fans are unbelievable.

On the undercard, Olympic gold medallist Anthony Joshua dismissed the unconvincing challenge of 38-year-old Argentine Hector Avila to record his fifth win in as many professional fights.

Londoner Joshua, sporting tartan, was warmly received by the Glasgow fans and rewarded them with a facile first-round knockout.

Anthony Ogogo also maintained his unbeaten record with victory against Greg O'Neil, the Olympic bronze medallist winning every round of their six-round middleweight encounter.

John Murray stopped former British and Commonwealth champion John Simpson in the second round of their lightweight fight while in the same division Paul Appleby lost to Scott Cardle, who took his record to 14 consecutive wins by stopping his opponent in the eighth round.

Glasgow super-featherweight Michael Roberts stretched his unbeaten record to 14 after he withstood some crunching shots from Frenchman Romain Peker to emerge a 59-55 winner.

On his professional debut, Glaswegian Ryan Smith outpointed Ibrar Riyaz from Reading in a four-rounder at lightweight.