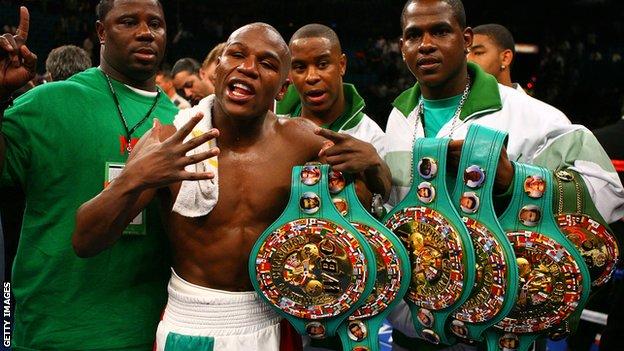 Unbeaten American Mayweather, 37, asked fans via Twitter to choose between Amir Khan and Maidana as his next opponent.

He will face 30-year-old Argentine Maidana at a venue to be decided.

"This is a great fight for me and he deserves the opportunity to see if he can do what 45 others have tried to do before him - beat me," Mayweather said.

A joint statement from Mayweather's team and Golden Boy Promotions said the "overwhelming majority" of the 200,000-plus fans who voted on social media picked Maidana, who has won 35 of his 38 fights, including 31 by knockout.

"I am extremely happy to be facing Floyd Mayweather because it will give me the opportunity to show the world that I am the best welterweight in the division," he said.

"I just handed a great defensive fighter his first loss and I plan to do the same to Mayweather," he said.

"He is an extremely skilled fighter who brings knockout danger to the ring."

Mayweather, a 10-time world champion in five weight divisions, set the record for the highest-grossing pay-per-view event in television history last September when his defeat of Saul Alvarez brought in more than $150m (£90m).