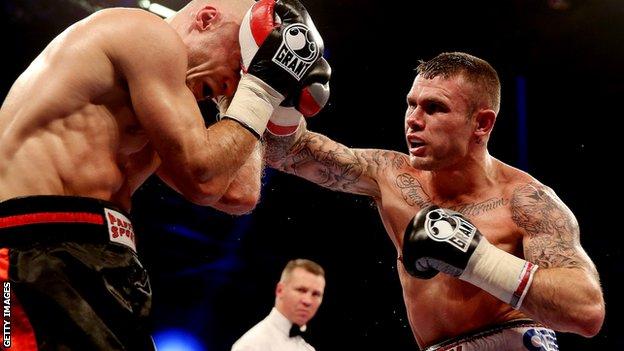 Martin Murray will face Jarrod Fletcher for the vacant WBA middleweight title in Monaco on 1 February.

The 'regular' belt is available as Kazakhstan's Gennady Golovkin has been upgraded to 'super' champion status.

Murray has twice fought for a world title on foreign soil, in 2011 and in April.

"I want to be the first world champion from St Helens and create history," he told BBC North West Tonight.

"It's my third world title fight and you could say I've been unlucky in the two times before.

"I'm definitely coming home with the world title belt on 1 February. I'm bringing it back to St Helens."

Murray battled past Sergey Khomitsky of Belarus on points in London on Saturday, after a was called off.

The two previous failures to claim the world title remain the only blots on Murray's professional record, which boasts 26 wins - 11 of which have come via knock out.

Australia's Fletcher has won 17 of his 18 contests, his only defeat coming against England's Billy Joe Saunders in September 2012.

"On paper he's the easiest [of his three world title opponents] but no way will I be taking him lightly," added the 31-year-old.

"I'm training like you wouldn't believe for this fight.

"The most important thing for me and my family is to win that world title and I'll leave no stone unturned."