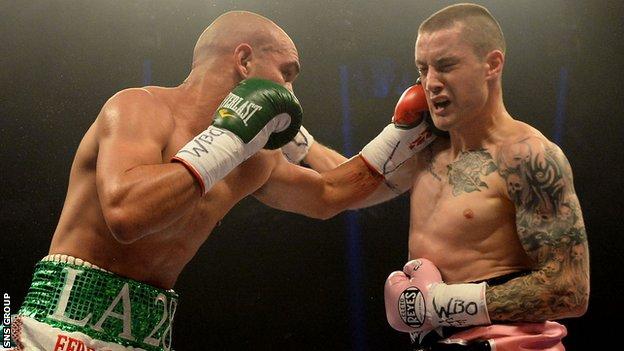 Ricky Burns is fit to resume sparring as he prepares to defend his WBO lightweight world title against unbeaten American Terence Crawford.

The Scottish champion has been unable to work in the ring since breaking his jaw during a controversial draw with Raymundo Beltran in September.

"The doctors have given me the all clear," Burns told BBC Scotland.

"Obviously I won't know how the jaw will react until it gets hit but I'm now focused on getting into camp."

No date has been set for the bout with mandatory challenger Crawford but the fight is scheduled for Glasgow and must take place before 8 March.

"As soon as we get the date, we'll know when to start sparring so we can test my jaw," added Burns.

"The longer I can leave it the better and I won't be happy until my jaw's been hit a couple of times.

"Sparring-wise, things won't change, although we'll maybe start off with some lighter guys for the first week.

"But the hard sparring five or six weeks before the fight will be the same as always. There will be no messing about.

"There are a few dates available and we should find out in the next couple of weeks."

Crawford will arrive in Scotland unbeaten in 22 contests and four years younger than the 30-year-old champion.

"I've seen a couple of his fights and he is very good," said Burns.

"Everybody's saying this will be my toughest fight to date, a lot of people are saying I'm going to be the underdog but that's the way I like it.

"I'm just going to go out there and do what I do.

"People have said some of the other guys I've fought would wipe the floor with me but I seem to rise to the occasion."