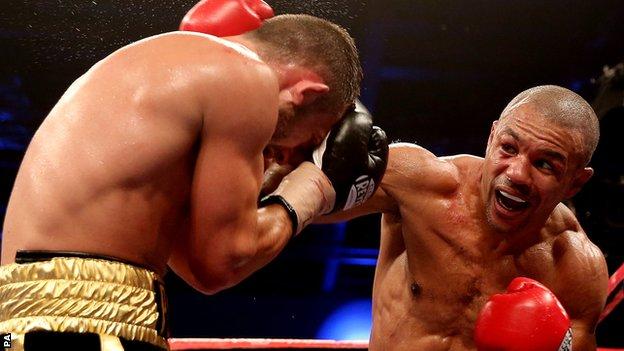 Lee Purdy was unsuccessful in his challenge for the European welterweight title as he was stopped by Italy's Leonard Bundu at London's ExCeL arena.

Purdy played his part in a gruelling bout but was ultimately outclassed, the referee calling it off with seven seconds left in the 12th round.

On a stacked card there were also wins for Martin Murray and Kevin Mitchell.

Colchester's Purdy, who lost to then IBF welterweight champion Devon Alexander in May, started well, staggering Bundu with the first punch he threw.

The 26-year-old also landed with some spiteful body shots in the early rounds, but most of the quality work was coming from the 39-year-old champion.

Bundu looked like he might be tiring in rounds six and seven but changed tactics in the eighth, moving around the ring and peppering Purdy with snappy combinations.

The Italian, unbeaten in 32 fights, floored Purdy with a wicked right hand in the closing stages of the final round and the referee waved it off soon after.

Two of the judges had Bundu ahead while, remarkably, one had the fight even at the time of the stoppage.

But Dagenham's former lightweight world-title challenger Mitchell was impressive in stopping Spaniard Karim El Ouazghari in the ninth round.

In his second fight since being stripped of the IBF bantamweight title, and his second in three weeks, McDonnell did not have it all his own way against game Spaniard Medina.

But having come through a tricky test, the 27-year-old could be handed a second world-title shot.

Murray, 31, recently recovered from a virus and looked listless throughout against his 39-year-old opponent, whom he also beat in 2009.

Afterwards, Murray's manager Ricky Hatton revealed his charge would be fighting for a world title for a third time in February.

In his previous fight, the St Helens fighter was beaten by WBC champion Sergio Martinez and Murray was unlucky to lose to then WBA champion Felix Sturm in 2011.

The 29-year-old Mitchell, stopped by Ricky Burns in 2012 when challenging for the Scot's WBO lightweight title, could now face Hull's Tommy Coyle in a world-title eliminator.

Mitchell and Coyle own fringe versions of the IBF title, while Mexico's Miguel Vazquez is the governing body's full champion.

In his fourth fight as a pro, Olympic bronze medallist Anthony Ogogo won all six rounds against Wiltshire's Dan Blackwell.