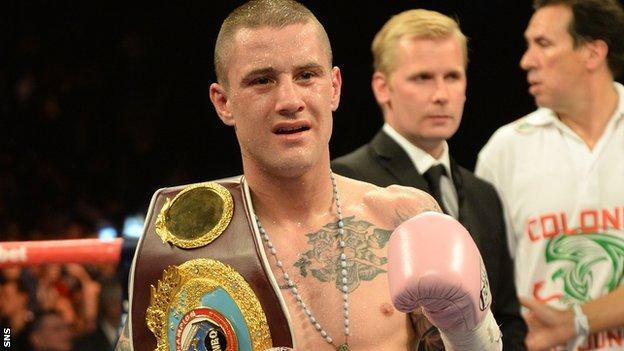 The unbeaten American will come to fight in Glasgow as Burns attempts the fifth defence of his belt.

Hearn tweeted: "Delighted to confirm we have agreed terms with @trboxing for @ricksterko to face @budcrawford402 in Glasgow in February."

Coatbridge fighter Burns has not fought since breaking his jaw in a draw with Raymundo Beltran in September.

Hearn says that the date will be confirmed soon.

Fears had been cast over 30-year-old Burns's boxing future following the match with Mexican challenger Beltran at Glasgow's SECC.

Burns's camp said their fighter sustained the injury in the second round, but fought on in a contest Beltran's management and many other observers believed the 32-year-old had won.

There were calls for Beltran to be given a re-match, which Burns appeared keen to do.

However, the WBO have ordered Burns to fight mandatory challenger Crawford first.