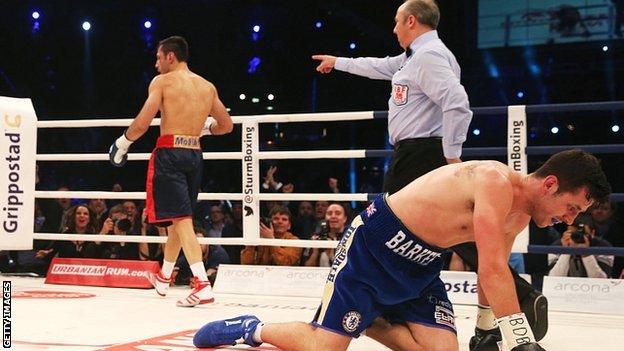 Darren Barker's career could be over after a dislocated hip contributed to him losing his IBF middleweight title to Felix Sturm in Stuttgart.

German Sturm started at a furious pace and the decision by Barker, making the first defence of his belt, to stand and trade accelerated his downfall.

Barker, 31, was floored twice midway through the second round, after which trainer Tony Sims threw in the towel.

It transpired that the Londoner had suffered his injury in the first round.

Barker had surgery on both hips in 2010, after which he was out of the ring for more than 12 months.

The Englishman, who won the title from Australia's Daniel Geale in Atlantic City in August, has a clause in his contract for a rematch with Sturm.

But while the German said he would be happy to face Barker in London, Sims said his charge's latest mishap makes it unlikely.

"It's a disaster really," Sims said. "I don't really think you'll see him in a ring again now.

"He's had all these problems with his hips before, he's had them operated on and they're just not right.

"He's completely gone. They're going to take him to the hospital to do an X-ray on that and we'll see what's happening from there.

"It's really disappointing. We had a game plan and he'd done loads of sparring. You don't imagine this is going to happen in a fight, especially in the first round.

"It's happened and there's nothing you can do about it."

An estimated 1,000 Barker fans made the trip to Stuttgart and there was a festival atmosphere in the Porsche Arena before the first bell. 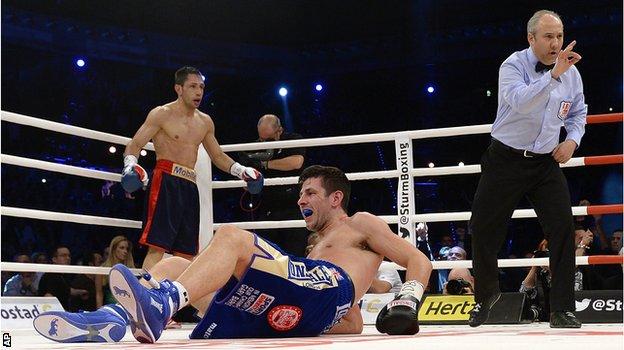 They had been told that Sturm, who earned a contentious split-decision victory over Birmingham's Matt Macklin in 2011 before holding St Helens fighter Martin Murray to a draw, was on the slide.

But the 34-year-old, who has been in the professional ranks since 2001 and was engaging in his 20th world title contest, looked sharper from the start.

Barker was backed up by a succession of left-hook leads in the early stages and Sturm won the first round at a canter.

The champion made a brighter start to the second, having some success to Sturm's body, but the beginning of the end came when Sturm dropped Barker with a right to the back of the ear.

Barker still looked groggy when he was waved back in by the referee and was soon down again and complaining about his hip.

And after seeing Barker take yet more more punishment, Sims decided he had seen enough two minutes and nine seconds into the round.

"I hit him well with my swings,'' said Sturm, who is of Bosnian descent. "We worked on that in training. I also worked on my hip rotation and was more stable than before."