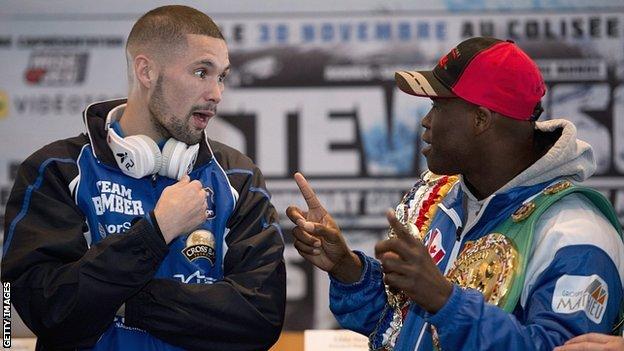 Underdog Bellew, who turns 31 on the day of the fight, has vowed to "beat up and manhandle" his 36-year-old rival.

And Conteh, holder of the WBC title between 1974 and 1978, believes Bellew has the ability to cause an upset.

"Tony has the skills, height and reach and is very confident," said Conteh.

"He trains very well, has prepared for it properly and is coming in at the right time. He's just hitting his peak."

Stevenson, who has 22 wins and one defeat, won the WBC crown from Chad Dawson in June, knocking out the American in one round, before retiring Tavoris Cloud in September.

The Haiti-born southpaw, who also has 19 knockouts, has stopped all nine opponents since his one loss, a second-round knockout by journeyman Darnell Boone in 2010.

But Conteh, whom Bellew has sought out for advice in the past, believes the challenger will withstand anything Stevenson throws at him.

"But Tony can punch himself, he can whack. And Stevenson has been punched down before, he can be got to."

Bellew, who lost a world title challenge against Welshman Nathan Cleverly in 2011, was making confident noises at the final pre-fight news conference on Wednesday.

"I'm talking about whatever it takes and whatever I have to do. On Saturday I'm going to be world champion.

"This little man [Stevenson] is not keeping me on the floor."

Stevenson, whose one defeat came at super-middleweight, countered: "You've never fought anyone like me. I am going to knock you out."

Awaiting the winner could be 48-year-old American legend Bernard Hopkins, holder of the IBF belt.

But also in the mix is unbeaten Russian Sergey Kovalev, who defends his WBO belt against Ukrainian Ismayl Sillakh on the undercard.

It is the first title defence for Kovalev, who stopped Cleverly in the fourth round three months ago in Cardiff to take his world title.